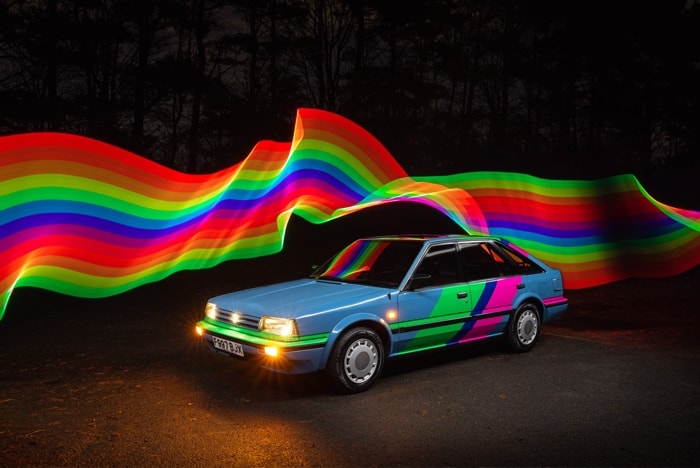 Nissan is celebrating 35 years of production at their Sunderland plant in the UK and to celebrate they have created a one-off electric LEAF-powered Nissan Bluebird.

The electric-powered Nissan Bluebird is called the Newbird and it uses the electric drivetrain of the Nissan LEAF.

The Nissan Bluebird was extensively modified to integrate the LEAF’s electric drivetrain. The original petrol combustion engine and gearbox were removed and a LEAF motor, inverter and 40kWh battery pack installed, with the battery modules split between the engine bay and boot for optimised weight distribution.

Updates and modifications were made to the power steering, braking and heating systems to enable them to be electrically powered. A custom suspension was also installed to support the additional weight from the battery packs.

As a nod to the car’s electric updates, the original Nissan bonnet badge received a LED backlight (for when the vehicle is static).

The car is recharged through the original fuel flap, which provides access to the charging port. The battery can be recharged at up to 6.6kW and the original driver instrument panel has been connected to the EV system to enable the fuel gauge to show the battery state of charge.

You can find out more details about this electric-powered Nissan Bluebird over at the Nissan website at the link below.