The Nexus 5’s paper statistics have all pretty much been leaked already, so it’s not surprising that a video of the prototype model has leaked as well. The video shows the device from all angles and runs a few apps to show it working as well. It still looks like it’s a little rough around the edges and isn’t likely to be the actual model that ships soon, but it’s still a nice preview into what’s to come. 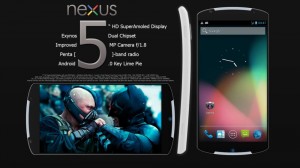 I wouldn’t be surprised if this leak isn’t from Google. They already leaked a photo so why not leak a seven minute long video too? It’s getting them free publicity, not that they need it, and generating free early buzz for their latest smartphone device that’s going to cause their website to become overloaded with pre-order attempts.

It would be nice if the video had sound, silent films are SO sixty years ago, but otherwise it’s a nicely crafted video that’s reminiscent of professional review. Maybe the videographer just forgot to add sound or has a problem with his camera?

Who’s excited for the Nexus 5? It’s a top-of-the-line smartphone that comes without a contract restriction for $300. What’s not to be excited about?!