Oh, MySpace! Tis a tragedy to behold how far you’ve fallen down, down, down. Worse, Rupert Murdoch’s News Corp now wants to be rid of you. Having Taylor Swift and the Jonas Brothers plastered on every user account barely helped matters, did it? 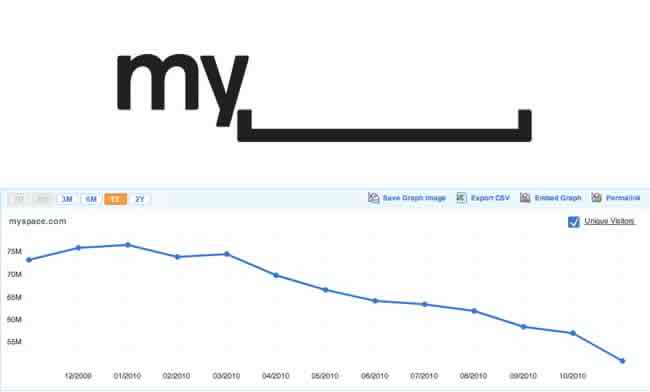 The graphic above was featured in a story we ran earlier this year about MySpace’s layoff plans, itself a worrying sign of its demise. Thanks to a mass exodus of users who’d rather entertain themselves on Facebook, MySpace has become so irrelevant it’s current owner—who purchased it for half a billion dollars six years ago—wants to sell it off. To whom, you ask?

Here’s a decent portion of the short news story from Reuters:

“Most of the buyout or spin-off interest is expected to come from financial parties such as private equity and venture capital. But possible strategic interest could come from parties such as mobile social networking site MocoSpace and gaming site Zynga. The person said Zynga is currently not in talks with News Corp about Myspace. MocoSpace said earlier this month it was interested in buying Myspace.

News Corp acquired Myspace in 2005 for $580 million after News Corp Chief Executive Rupert Murdoch famously swooped in to beat rivals such as MTV owner Viacom Inc in the bidding. But since then, the loss-making website has become increasingly irrelevant as a social network for many users who have migrated to Facebook.”