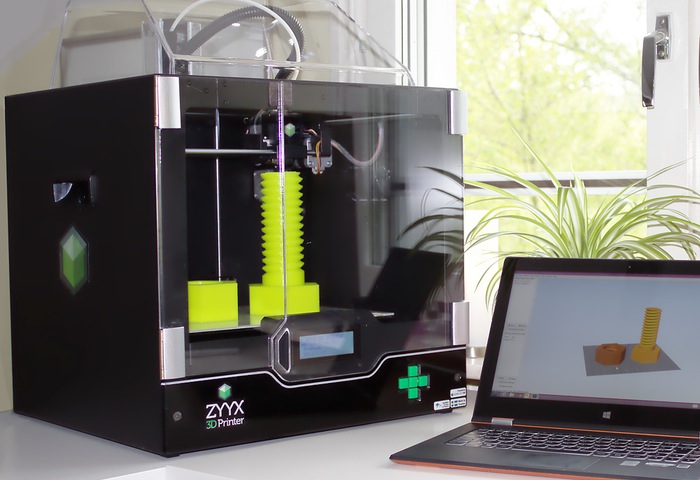 A new 3D printer has been unveiled this week called the ZYYX 3D Printer which has been designed in Sweden by Magicfirm Europe and brings with a unique built-in air filtration system to the market.

The ZYYX 3D Printer is also fitted with a new automatic build plate calibration system which you can see in action after the jump.

“Up until now 3D printers have been quite unpleasant devices to have in the home, office or workspace due to the strong smell of heated plastic. The ZYYX 3D Printer tackles this problem by enclosing the print space and creating a slight pressure difference with the help of a low speed fan, with the outgoing air passing through an active carbon filter to remove the plastic smell.

The ZYYX 3D Printer eliminates the need for tedious adjustments of the mechanics before every print, instead the print head includes a probe that probes the build plate at three positions before every print and electronically adjust the print plane to keep your models safely on the plate. The printer comes pre-leveled and precalibrated to ensure you get a great start to your printing experience.”

The ZYYX 3D printer is also fitted with a new version of the Sailfish open source firmware which includes new features and enhancements developed by Magicfirm Europe.

TheZYYX 3D Printer is currently available to pre-order for €1550 Plus VAT and shipping and more information can be found over on the official website.