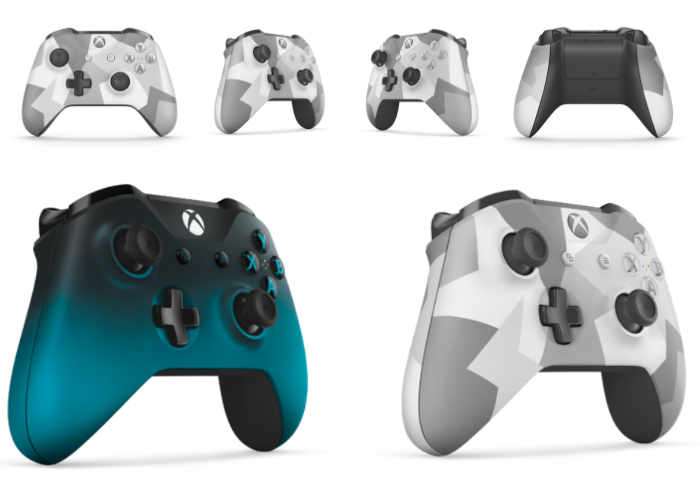 The new Xbox wireless controllers will be available later this week from retailers worldwide from February 7th and are priced at $70 each. As you would expect they will seamlessly pair with any Xbox One or Xbox One S console.

The Xbox Wireless Controller – Ocean Shadow Special Edition is the next evolution of the Shadow controller series we introduced last year. This controller features a sleek, matte black top case and sides that fade to a light blue metallic finish. The buttons, triggers and D-pad have a glossy black finish with light blue highlights on the ABXY and menu buttons.

The Xbox Wireless Controller – Winter Forces Special Edition is the newest of our Forces series controllers and is inspired by the popularity of our previous Armed Forces, Covert Forces, and Midnight Forces controllers. It has a modern, arctic camo pattern with light and dark grey accents, giving it a striking look alongside your Xbox One S console. This new controller will also be available for $69.99 USD at select retailers worldwide starting February 7th 2017.

For more information on the new new Xbox controllers jump over to the Kickstarter website for details by following the link below.