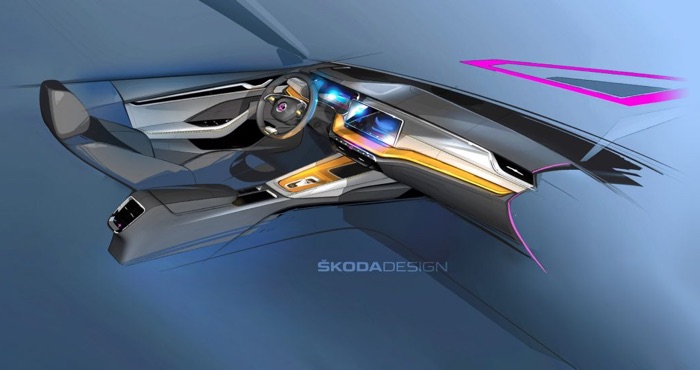 Skoda has released a design sketch for their new Skoda Octavia, the car will be officially unveiled in Prague on the 11th of November 2019.

The new Skoda Octavia interior can be seen in the sketch above, this is the fourth generation Octavia which will get a number of upgrades and a new design.

The sketches released by ŠKODA Design show the redesigned instrument panel in the new OCTAVIA. Topped by a large, free-standing central display, it’s composed of several layers whose lines and colours reference the signature shape of the ŠKODA grille. The instrument panel’s visual width emphasises the cabin’s generous sense of space. The fourth generation of the most popular model in ŠKODA history once again provides even more interior space than its predecessor.

The new interior concept also includes a steering wheel with a two-spoke design featuring buttons and scroll wheels that make for enhanced ergonomics. In the elegant and tidy centre console, a small rocker switch has taken the place of the familiar selector lever. It uses shift-by-wire technology to electronically communicate the desired DSG transmission setting. Also making its debut in the new OCTAVIA is the Climatronic three-zone air conditioning system.

You can find out more details about the new Skoda Octavia over at Skoda at the link below.