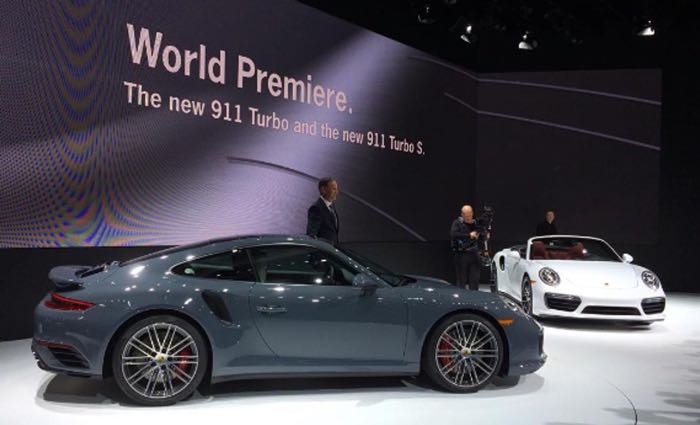 The new Porsche 911 Turbo and 911 Turbo S were made official at the beginning of December and now Porsche is showing them off at this years Detroit Motor Show.

The 911 Turbo and 911 Turbo S are available in both coupe and convertible versions and both models come with some impressive performance figures.

The top models of the 911 model series – the 911 Turbo and 911 Turbo S – now boast 15 kW (20 hp, 911 Turbo: Combined fuel consumption 9.1 l/100 km, CO2 emissions 212 g/km, 911 Turbo Cabriolet: Combined fuel consumption 9.3 l/100 km, CO2 emissions 216 g/km) more power, a sharpened design and improved features. The models will be available in both coupe and convertible versions from the start. The bi-turbo six-cylinder engine in the 911 Turbo with 3.8 litres of displacement now has a power output of 397 kW (540 hp). This power gain was achieved by modified inlet ports in the cylinder head, new injection nozzles and higher fuel pressure. The 911 Turbo S now develops 427 kW (580 hp) thanks to new turbochargers with larger compressors. Porsche is still the only manufacturer to utilise turbochargers with variable turbine geometry in petrol engines.

You can find out more details about the new Porsche 911 Turbo over at Porsche at the link below.