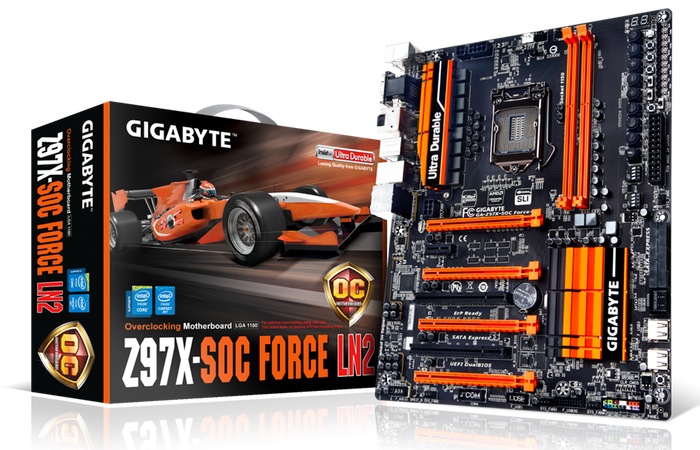 Kingston and Gigabyte have teamed up to set a new DDR3 RAM World Record which has been now set at a massive 4.62GHz using the Gigabyte LN2-only motherboard, the Z97X-SOC Force LN2.

Also the SOC Force LN2 motherboard has broken the DDR3 memory world record, not once, but twice. First reaching a record of 4.5GHz, and then three days later clocking up a massive 4.56GHz.

Watch the videos below to learn more about the DDR3 RAM world record attempt and see it in action. Tweak Town explains a little more:

“Once at launch, hitting 4.5GHz, and then just three days later, the motherboard was used for another world record. The second time was at the Kingston HyperX OC Takeover World Finals, where a team of overclockers breached the massive 4.56GHz speed. If you thought this was the end, you were wrong. After a bunch of reports hitting the Internet of suspicious memory overclocks, GIGABYTE took upon itself to pull out the big guns with its Z97X-SOC Force LN2 motherboard.”

Gigabytes overclocking champions, HiCookie and Sofos1900 were available, as well as an official HWBOT representative, demo starting the rig that was used, which included a top-of-the-range oscilloscope that was hooked up directly to the RAM, which showed its “true” live frequency.”

For more information on the new Z97X-SOC Force LN2 motherboard jump over to the Gigabyte website for details.