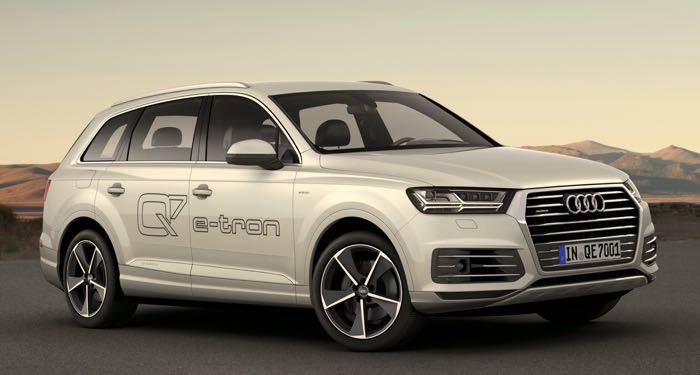 Audi has announced a new version of their Q7 E-Tron, the Audi Q7 E-Tron 2.0 TFSI at the Auto Shanghai 2015 motor show.

This is the second Audi Q7 E-tron the company has introduced, the previously model featured a 3.0 TDI engine.

With the Audi Q7 e-tron 2.0 TFSI quattro, the company is combining a TFSI plug‑in hybrid with quattro drive for the first time. Audi has developed this model especially for the Asian markets China, Singapore and Japan. It is sporty, comfortable and at the same time supremely efficient. The Q7 e-tron 2.0 FSI quattro accelerates from 0 to 100 km/h (62.1 mph) in less than six seconds and uses just 2.5 liters of fuel per 100 kilometers (94.1 US mpg), according to the measuring method prescribed in China for plug‑in hybrid vehicles.

Powered by the lithium‑ion battery, the large SUV covers up to 53 kilometers (32.9 mi) on electric power alone – quietly, powerfully and with zero local emissions. Total range is 1,020 kilometers (633.8 mi). The Audi Q7 e-tron 2.0 TFSI quattro will be available from dealers in the three specified markets starting in 2016.

You can find out more details about the Audi Q7 E-Tron 2.0 TFSI over at Audi at the link below.