Ah yes, this is an old story. Turns out that not long ago, a scientist named Felisa Wolfe-Simon (pictured below in a hat) discovered an incredible bacteria that subsisted on a diet of arsenic in California’s arid Mono Lake. Intrigued, her colleagues have since been trying to understand exactly what equips the bacteria to survive in such a harsh environment. 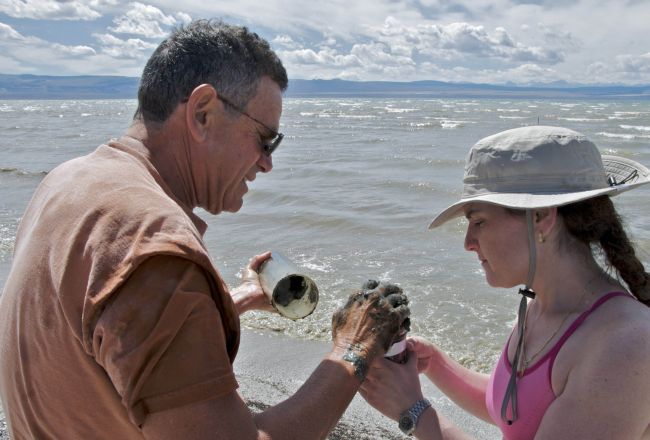 To update the reader’s memory:

Christened GFAJ-1 by Felisa Wolfe-Simone, a NASA Research Fellow embedded with the U.S. Geological Survey, the bacteria samples were retrieved from the alkaline mud of the parched Lake Mono (pictured most awsomely above)  in NoCal. What surprised Wolfe-Simone is the test environment it was placed in, one that had generous amounts of arsenic like its home, still proved a viable habitat. In the absence of phosphorous, the GFAJ-1 bcteria uses arsenic instead, which is chemically similar to phosphorous.

These days, however, a not-so-minor buzz surrounds the controversial bacterium. Thanks to Ms. Wolfe-Simon and her pals at the UIC, their GFAJ-1 research got published in Science and caused quite a stir. Their peers in the scientific community aren’t exactly sure how to digest the fact that the GFAJ-1 bacterium can utilize toxic arsenic in lieu of phosphorous, thereby sustaining itself as a living organism.

To further test their hypothesis, the Wolfe-Simon (don’t you just love the name?) GFAJ-1 is having its genome sequenced by UIC microbiologists. The big hurdle now is to map the genome and compare it to other bacteria. If they succeed, the implications are pretty tremendous.