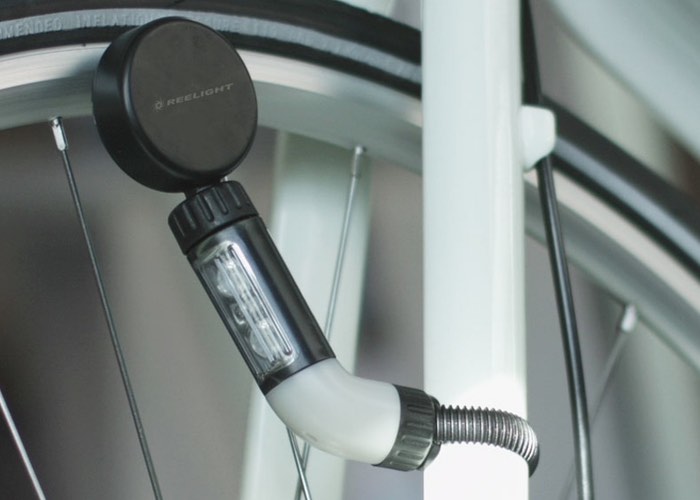 Cyclists in the market for a new bike light, may be interested in a new design created by Reelight that requires no batteries and is completely frictionless yet is powered 100 percent by pedal power.

ReelightIs a Scandinavian design team that are now looking to scale up production of their new design which has been taken to a final prototype stage now requires $60,000 to make the jump into manufacture.
Watch the promotional video below to learn more about how this frictionless bike light functions and the inspirations behind. Its creators and developers Reelight explain a little more about its design.

NEO is the synthesis of advanced technology and design, representing the future of bike lights. Based on our users feedback we wanted to create a simple and intuitive bike light that is both easy to mount and also more convenient to use than what is currently on the road. Beautifully designed, its unique operation was at the core throughout the process. Powered by Eddy currents, the energy is generated without friction making it incredibly efficient, you’ll never have to think about batteries again.

At Reelight, traffic safety is our main goal. For more than a decade we have been helping cyclists around the world feel assured and safe on the road. We first invented the ground breaking induction bike light a few years ago powered by magnets that are placed on the spokes of your bike, eliminating the need for batteries. Based on a large scale research study with over 4,000 participating cyclists, Reelight has proven that our induction lights reduce probability of accidents by up to 35%. Furthermore, 85% of our induction light users have also expressed to have felt safer whilst riding in traffic.

For the past two years, we have been researching into improving human powered energy solutions on bicycles, making our products more efficient and user friendly. Evolution has brought us to a fuss-free mounting solution with a high level of light output that is powered by the motion of your bike rim. An eye-catching design solution echoes the old school dynamo principle whilst highlighting the friction free power generation. The result allows any bicycle rider to take advantage of our proven solutions using no extra power, and help minimize the impact on the environment.