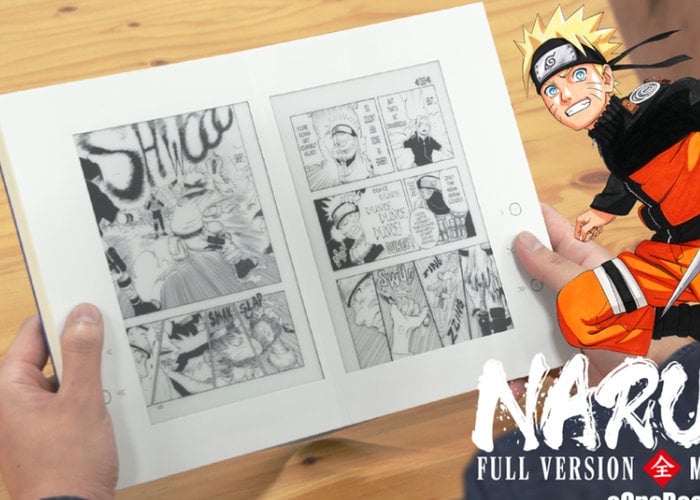 Fans of manga maybe interested in a new high resolution manga reader launched via Kickstarter this week in the form of the Naruto eOneBook, which as the name suggests comes supplied with all 72 volumes.

The dual screen digital reader is now available to back via Kickstarter with earlybird pledges available from £423. Worldwide delivery is expected to commence sometime during December 2019. When compared to other e-reader devices artwork can be degraded and compressed resulting in poor imagery. The high resolution eOneBook allows you to enjoy the artwork as it should be.

“’Naruto’ is set in the world of the “Five Great Shinobi Nations.” The protagonist Uzumaki Naruto has grown up in Konohagakure, the hidden village of the “Land of Fire” which is one of the five nations. Naruto is a ninja-in-training with a need for attention who dreams of becoming the next Hokage, the greatest ninja in the village! He is struggling to graduate from the Ninja Academy and finally making it to the lowest genin ninja rank. Naruto and his comrades Uchiha Sasuke and Haruno Sakura are organized into a ninja team headed by the elite warrior Hatake Kakashi. Overcoming many hardships and ordeals, Naruto grows into a powerful ninja along with his comrades.”

“The world’s best-loved Ninja has come back with a new type of manga e-reader, believe it! NARUTO eOneBook is a book-like digital reader containing all 72 volumes of ‘Naruto’ and a spinoff titled ‘Naruto: The Seventh Hokage and the Scarlet Spring’. What’s even more special to you is an exclusive dust jacket newly drawn by Masashi Kishimoto! You can enjoy the world of Naruto thoroughly.”