Turns out it’s part of some strange online campaign whose intentions are a little too opaque for comfort. The eight foot curiosity that was ‘washed up’ in a Florida beach is named Ego Leonard (says so on his t-shirt) and is supposed to be on a grand tour of our reality. But wait, it gets weirder. 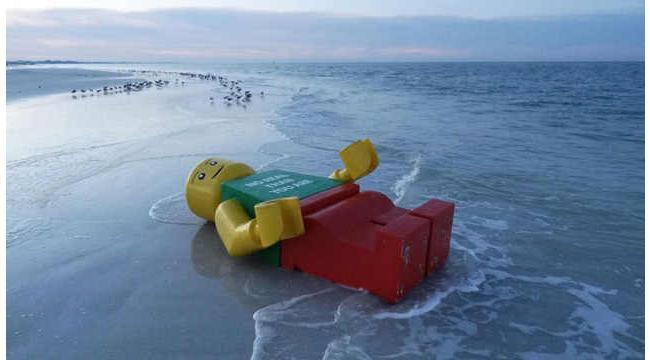 If you’re wondering about what it says on Ego Leonard’s shirt, that’s ‘No real than you are.’ a strange slogan that hints at his origins.

The official site (click on the source link), reveals Dutch origins and a cryptic message that indicates Ego Leonard is visiting our world after becoming disenchanted with the virtual dimension he once called home. Something to do with greed and power, like Middle Earth fallen to the powers of Sauron.

Anyway, so he ended up in a beach, surprisingly in tact, and there’s little evidence to indicate he survived the rigors of tens-Atlantic voyage. Hmmmmmm.

Also, he wants to learn about you and your back story. This means he can be emailed via hallo@egoleonard.nl.

There’s even a video: