So instead of going clickity-click, this gadget is bent this way and that to achieve the desired result. The result of your effort is being able to switch between channels and other TV functions. Being a Japanese gadget, it’s a collaboration between an established company (Murata) and high-tech university labs. The result is what’s being marketed as the Leaf Grip Remote Controller. A bit off, if you ask us. Leaf grip? Oh well, you never really know what the Japanese are going to come up with next. 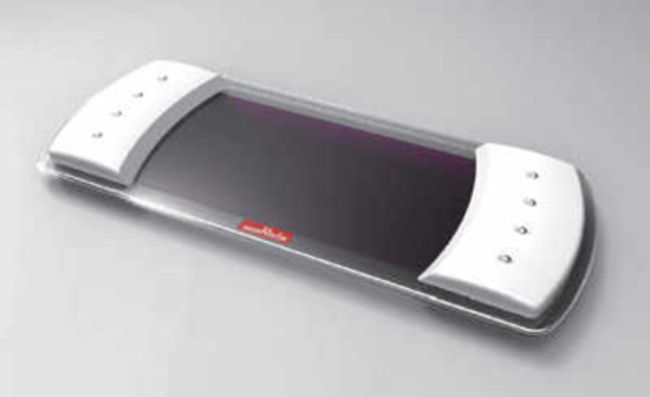 Kindly excuse the less than sterling quality pic seen above. At its current state, the Leaf Grip isn’t so far removed from a concept. It’s currently such an exceptional gadget-to-be, that anyone interested in it will have to wait for next month’s CEATEC Japan 2011 exhibition.

If you’re wondering how this remote works, here’s the skinny. On each end of the Leaf Grip is a transmission circuit and on its surface is piezoelectric film that when bent, activates the photovoltaic cell sandwiched between them. Doesn’t seem to make much sense when explained in such terms, but that’s what the available product literature indicates.

At the moment it’s no use judging the viability of the Leaf Grip as a remote-controlled device that transforms the general viewing experience. Might as well see if it ever reaches the market. Our bet is the Leaf Grip won’t ever make it to retail while the technology gets applied elsewhere, like for gaming consoles where it will likely be more appreciated by grapple-happy gamers..