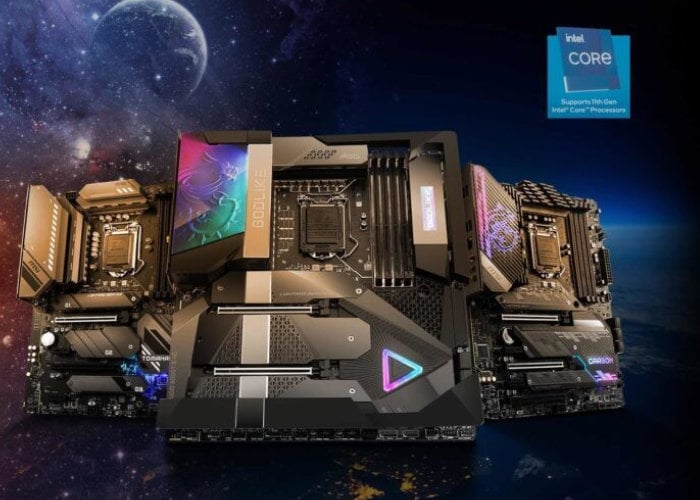 This week MSI has announced the official launch of its new MSI Intel 500 series of motherboards, providing you with support for 11th Gen Intel Core processors, PCIe 4.0, and all of Z590 Wi-Fi motherboards have at least one 2.5G LAN and the latest Wi-Fi 6E solution which extends to 6 GHz spectrum says MSI. The entire MSI Z590 Series has upgraded VRM power designs. MEG Z590 GODLIKE features direct 20 phases with 90 A SPS, while MEG Z590I UNIFY has direct 8 phases with 90 A SPS. For other MEG Series motherboards, they will have 16 phases with 90 A SPS with Mirrored Power Arrangement.

The MSI Z590 motherboards are constructed using at least 6 layers with 2oz thickened copper, to provide users with more reliable circuit transmission, with MEG ATX motherboards going up to 8 layers, and MEG Z590I UNIFY sporting a 10 layer construction. The entire MSI Z590 motherboards adopts Lightning USB 20G, known as USB 3.2 Gen2x2, capable of providing transfer speeds up to 20 Gbps via Type-C port. Onboard Thunderbolt 4 ports that the bandwidth speed is up to true 40 Gbps are exclusive to MEG Series.

“Dragon Center is comprehensively updated to MSI Center, which applies new UI design and advanced functions. In MSI Center, users can find Sound Tune, which turn it on by one click. MEG Z590 GODLIKE and MEG Z590 ACE have Audio Boost 5 HD adopting the new audio processor ALC 4082 and ESS codec. Both hardware and software enhancement, users can enjoy a good clean sound.”

“The MEG Z590 ACE has VRM heatsink, heat pipe and thermal pad to lower the temperature around CPU, and all of four M.2 slots are covered with M.2 Shield Frozr. On the top of PCB, Dedicated Choke Pad covers MOSFETs as well as chokes. More outstandingly, MSI upgrades Chest Plate of MEG Z490 ACE into aluminium Backplate. The cover range is enlarged including most parts of back to effectively dissipate the heat. After running internal tests, the temperatures of front and back PCB of MEG Z590 ACE can drop 21% and 15.8% respectively, and MEG Z590 GODLIKE drops 27% on the front and 16% at the back, which proves that MSI heat dissipation solutions work well.”

Unfortunately, no information on pricing or worldwide availability has been released as yet by MSI, but as soon as information comes to light, we will keep you updated as always. For more information and specifications on each individual board in the new series jump over to the Tech Power Website with a full MSI press release is available to read.