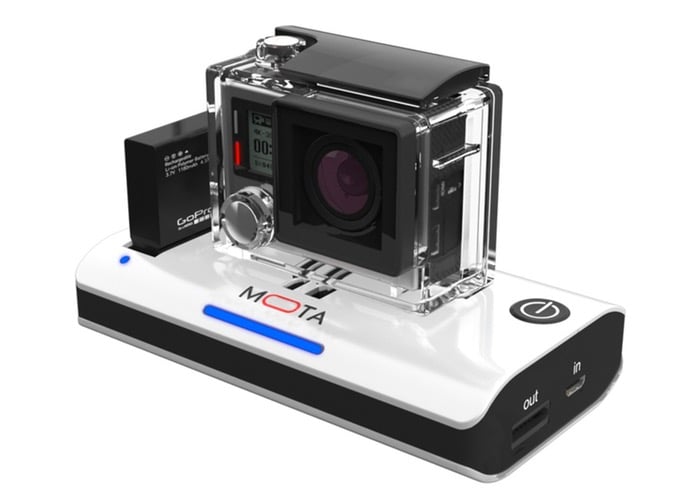 Photographers that own a GoPro action camera might be interested in a new wireless charging solution which has been specifically created for the Hero 3 and Hero 4 GoPro cameras.

Removing the need to constantly swap batteries when you have finished recording footage, and allowing you to enjoy the capacity of a 6,000 mAh battery complete with LED status lights. Check out the video below to learn more about the MOTA wireless charger for GoPro cameras.

The MOTA project is currently over on the Kickstarter crowd funding website looking to raise $15,000 in pledges. Its creators explain a little more:

“GoPro is awesome, but swapping batteries is a real pain. Taking GoPro out of its housing – exposing it and its batteries to the elements, risking getting moisture inside, and even possibly losing a part. And battery life is a constant concern.

We GoPro users need something better. That’s why MOTA invented the Wireless Charger for GoPro. It charges the camera through its housing, an extra battery, and can even charge a cell phone at the same time – with no need for external power. Thanks to its compact size, it’s small enough that you can take it with you and enjoy filming with your GoPro all day.

The MOTA Wireless Charger for GoPro keeps your camera running, so you can do more than ever before. Now go ahead – film uninterrupted, go for that prize shot, shoot at 4K, and even use cool accessories like the GoPro’s LCD Touch BacPac and Wi-Fi for longer periods of time.”

So if you think MOTA is something you could benefit from, visit the Kickstarter website to make a pledge and help MOTA become a reality with pledges starting from as little as $55 for early bird backers via the link below.