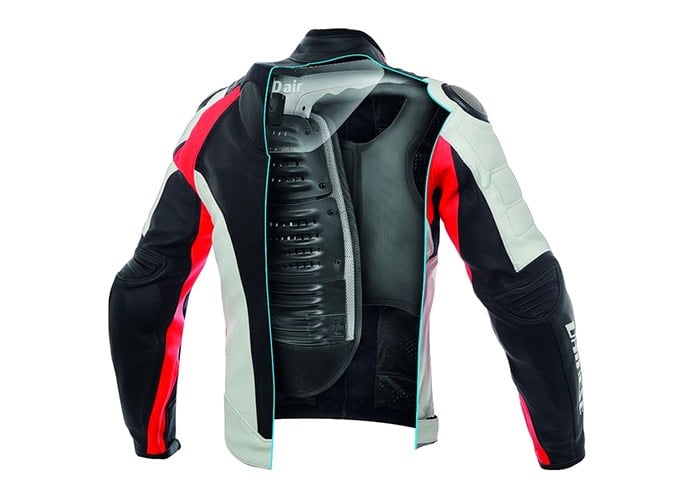 Dainese has created and announced the launch of a new motorcycle airbag jacket that takes the form of the Misano 1000, that will automatically inflate to protect a rider when it detects an accident.

The Misano 1000 will be launching during November of this year and will be priced at €1499 or $1695 and can be seen being worn in the video below.

Dainese has equipped the jacket with a integrated ON/OFF switch in its closing flap, that provides an additional safety factor. As well as notifying its wearer of its status via an LED light on the right arm showing the status of the airbag system.

Dainese has unveiled its brand new D-air Misano 1000, the very first stand-alone airbag leather jacket for road use that can operate with no need of a sensor kit or any sort of connection to the bike. The Misano 1000 air-bag system works alongside the back and chest-protectors to safeguard the rider’s collarbone, chest and back and to limit excessive strain to the neck.

Named to celebrate the 1000 deployments of the D-Air system, the ‘Misano 1000’ is the outcome of 15 years of experience in inflatable protection and has all sensors, electronics and the GPS housed in the back protector

For more information on the new Misano 1000 jump over to the Dainese website for details via the link below.