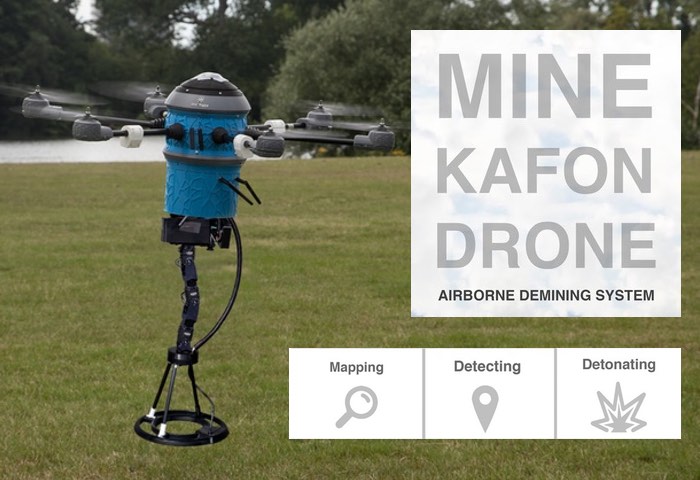 Massoud Hassani has once again taken to Kickstarter to raise funds for his next-generation demining system which this time takes the form of the Kafon Drone. The new drone scans the ground for mines and can be accurately flown into position before disarming any landmines.

Watch the promotional video below to see the airborne demining system in action, which has been created to help clear the world of landmines in less than 10 years.

The Mine Kafon Drone flies over dangerous areas to map, detect and detonate landmines from a safe distance. The drone works autonomously equipped with three separate interchangeable robotic extensions. These three methodologies combined makes the MKD up to 20 times faster than traditional demining technologies. As well as being safer, it also up to 200 times cheaper.

First the drone flies over the whole field with an aerial 3D mapping system to identify all the dangerous areas with GPS way points. Equipped with a robotic metal detecting arm the MKD hovers above the ground at approximately 4 cm to detect mines. Every detected mine is geotagged on the operator’s system to construct a map of known mine locations.

For the final phase of the process the MKD, attached with a robotic gripping arm, places a small detonator on every detected mine. The land mine is then detonated from a safe distance using a timer.

For more information on the new Kafon Drone jump over to the Kickstarter website for details by following the link below.