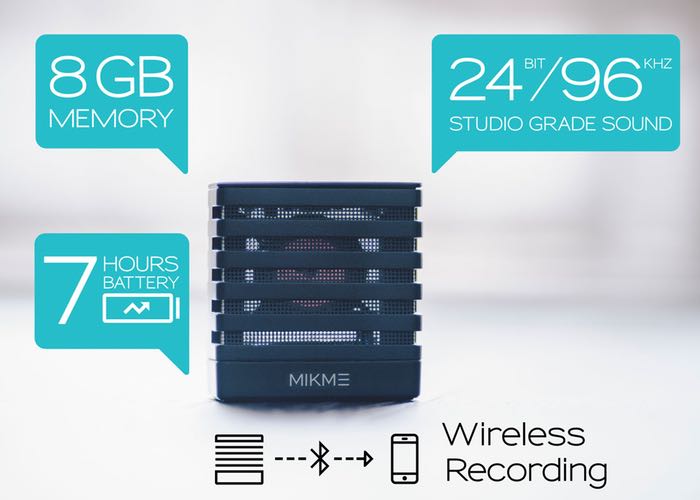 Anyone that need to record audio for podcasts, video or anything else and is fed up with having to use wired microphones, maybe interested in Mikme.

Mikme is a wireless recording microphone that can be used by anyone and is equipped with one button audio recording together with an internal 8GB memory for up to 180 hours of audio storage.

The rechargeable battery within Mikme is good for 7 hours of recording and audio is processed at 24bit 96khz, studio grade sound quality, say its makers. Once you have a recording simply use the companion app to edit your recording on the fly via your iOS or Android mobile device.

Whether you’re a musician. filmmaker, podcaster, student, skyper or lover of sound, Mikme is designed to capture it all. Great for songwriting, composing, interviews, sampling, rehearsals, skyping, video, multi-track audio and more. If there’s a sound you want to capture, Mikme’s got your back.

The Mikme Microphone is a very versatile tool. It works wirelessly with your smartphone, tablet or computer by streaming audio securely and immediately while recording. It also works standalone with it’s builtin digital 8GB audio recorder (24 bit, up to 96kHz). And with it’s large 1 inch true condenser, gold plated capsule it outperforms all USB and digital audio recorder in the market.

The Mikme is now over on Indiegogo looking to raise $25,000 in funding with pledges starting at $169 via the link below.