Microsoft has this week unveiled details of a new bundle it has put together to entice consumers to purchase their Microsoft Surface Pro 2, which they have aptly named the ‘Geek’ bundle.

The Microsoft Surface Pro 2 ‘Geek’ bundle includes a Surface Pro 2 tablet and an Xbox Wireless Controller for Windows to enjoy games on your new tablet, together with two free downloadable PC games to get your started. War Thunder Mustang Advanced Pack and Farming Simulator 2013. 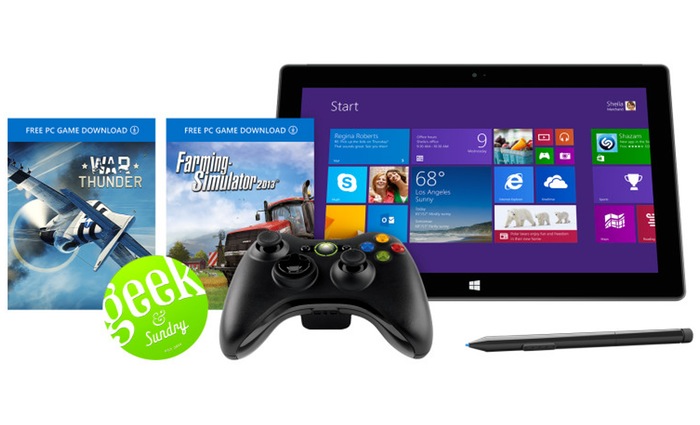 The Surface Pro 2 tablet is equipped with a 16:9 aspect ratio and 1920 x1080 screen resolution display together with USB 3.0, microSD card slot, mini DisplayPort, and Bluetooth 4.0 connectivity. Microsoft explains a little more about the games included in the Geek bundle.

“Farming Simulator 2013 (downloadable content): The largest and most exciting farming simulator ever made. Farming Simulator 2013 is bigger than its predecessor and enriched with outstanding content and many new features, challenging you to take on the role of a modern day farmer. The 2013 version has even more diverse crops, new livestock and new vehicles never seen before in a video game.

War Thunder, Mustang Advanced Pack (downloadable content): Mustang Advanced Pack features the most iconic American fighter in the United States Army Air Force, the North American P-51 Mustang, which was one of the most successful fighters of the entire WWII. This advanced pack includes: P-51D-20 ‘Mustang’ airplane, premium account for two weeks, and 2000 Golden Eagles. Works exclusively with War Thunder, a World War II MMO combat game, which can be downloaded for free.”

Priced at $899 the Microsoft Surface Pro 2 ‘Geek’ bundle offer a saving of $104 on buying the items separately and can be ordered directly from the Microsoft online store.