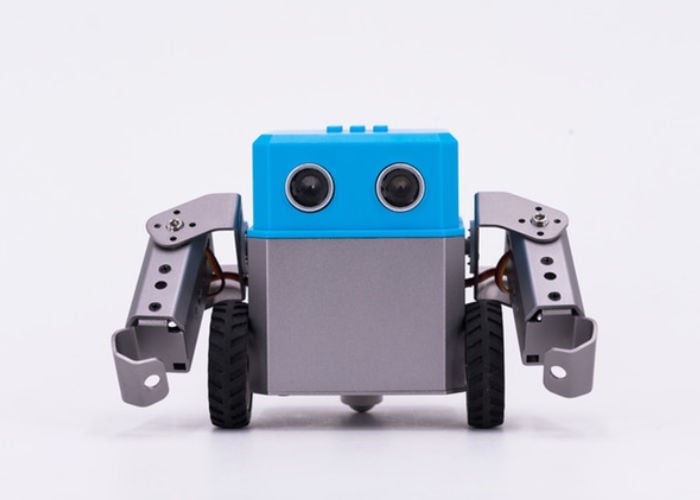 The development team at Gaiaplay based in London, have created a small STEAM programmable robot kit powered by Micro:bit in the form of the BOT:BIT. Bot:Bit is equipped with 2 speedy wheels and a pair of versatile arms to empower your creative ideas. “Using Bot:bit is as easy as A-B-C: Assemble , Build the code and Customise” Watch the demonstration video below to learn more about the cute little robot.

Bot:Bit is world first customisable Micro:bit-based robot that teaches robotics and programming in many possible fun ways say its creators. Users can programme the robot using the powerful MicroPython programming language and can be easily easily coded using programming blocks.

“Bot:Bit is world first customisable Micro:bit-based robot that teaches robotics and programming in many possible fun ways. Using MicroPython, a powerful programming language, Bot:Bit allows you to code easily in programming blocks. Whether you are novice or expert, Bot:Bit is always ready for your command. Thanks to Micro:bit’s support for swarm robotics, it enables Bot:Bit to be a team player. See multiple Bot:Bits demonstrate the true definition of teamwork! Using our customized programming user interface, simply drag and drop the code blocks and upload to Bot:bit with a simple click! Just sit back and relax, let’s see Bot:Bit in action! “

Jump over to the official crowdfunding campaign page by following the link below for more details and full specifications as well as a complete list of all available pledge options starting from £49. If all goes well worldwide shipping is expected to commence during May 2019.