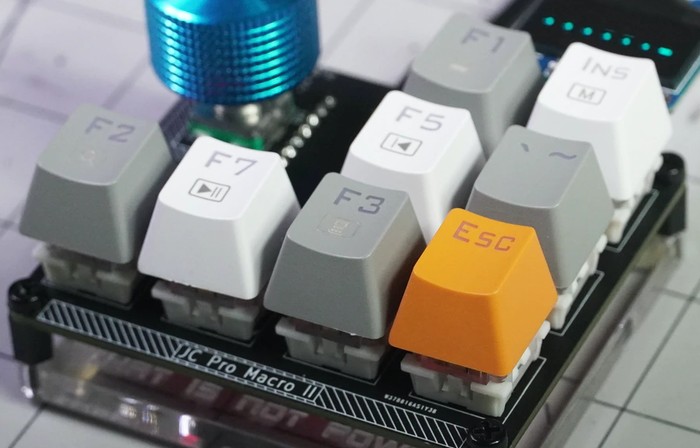 Engineer, creator and tech journalist Jeremy Cook based in Tampa Florida has created a small mechanical keypad aptly named the JC Pro Macro 2 featuring 8 customisable keys, a rotary encoder GPI breakouts and optional screen. Launched via Kickstarter over 80 backers have helped the project blast past its required pledge goal with still 24 days remaining. Powered by a swappable Arduino-programmable ATMega32U4 Pro Micro (clone) the mechanical key bad can be used for a wide variety of different applications some of which are listed below. Backer early bird pledges are now available for the unique project from roughly $59 or £43 (depending on current exchange rates). 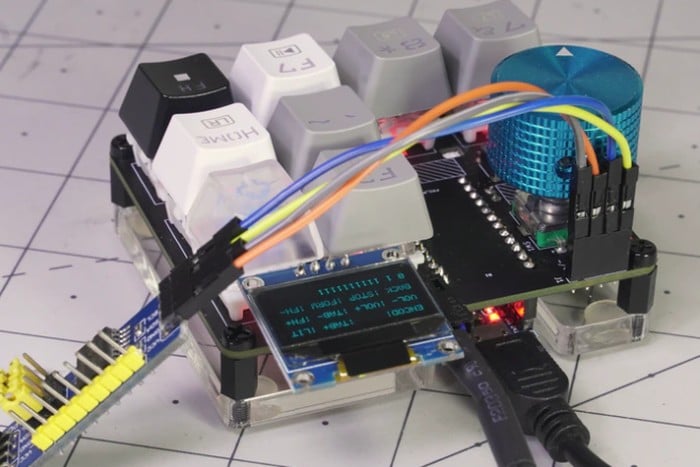 Keyboard combinations with a single keystroke (e.g. ctl-alt-insertkeyhere)
input lots o’ text with a single button
Media control (literally crank up the volume via rotary encoder)
Program and change key functionality using the Arduino IDE
8 main input keyswitches with programmable lights for each, plus programmable under-lighting
No software installation needed on host computer for standard operation. Plug in and go!
GPIO pins broken out, including I2C pins for virtually unlimited control of external devices
ATMega32U4 Pro Micro (clone) controller. Socketed for easy swap-out. Should be able to swap out for Pro Micro footprint boards like the nice!nano or Elite-C, but this has not been tested.
Individually addressable lighting for each keyswitch, along with underlighting for awesome ambient effect.
Can be used independently of a computer as a standalone controller
Optional OLED display

“The JC Pro Macro 2 is a USB keyboard device that emulates keystrokes and mouse movements, saving you precious computer interface time. A swappable Arduino-programmable ATMega32U4 Pro Micro (clone) powers it, and the board provides GPIO/I2C breakout pins for unlimited tinkering and customization. The keyboard/mouse combination is a fantastic general purpose tool for interfacing with a computer, which has nominally done the job for decades. But it wasn’t made just for you and the way you work with a computer. The JC Pro Macro 2 adds an extra input device that can be customized to your liking for a huge productivity boost!”

“Programming and customization are via the Arduino IDE, and it can theoretically run QMK firmware for custom layouts without Arduino knowledge. Preliminary testing with QMK has been successful, and full functionality can hopefully be developed further.”

“I spent a decade in manufacturing automation, making me intimately familiar with the processes needed to create many copies of one device. When in charge of manufacturing lines, failure is not an option, and I hope to bring that experience and attitude to bear here. “

For a complete list of all available project pledges, stretch goals, extra media and specifications for the mechanical keypad kit, jump over to the official JC Pro Macro 2 crowd funding campaign page by checking out the link below.