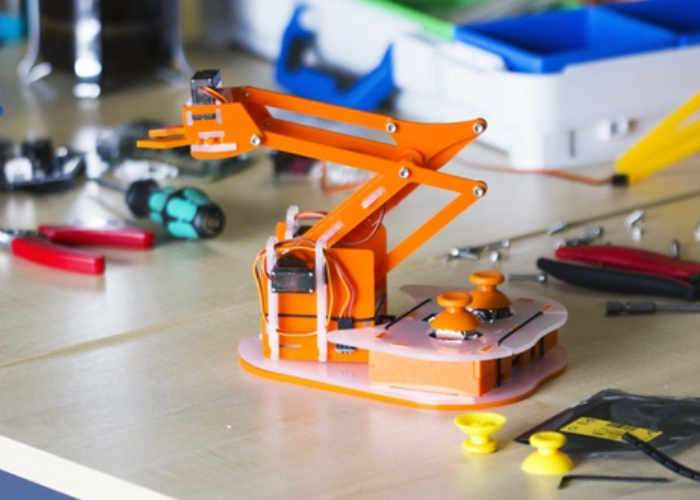 Raspberry Pi enthusiasts or those looking to learn more about robotics may be interested in a new Raspberry Pi powered robot arm called the MeArm Pi, which has been created by Mime Industries based in Nottingham within the UK.

The MeArm Pi DIY kit is available from £60, when you supplied your own Raspberry Pi mini PC, power supply and 8 GB memory card. Watch the video below to learn more about this easy to build robotic arm which has been designed for children and adults alike.

The MeArm Pi Kit is a build-it-yourself robot arm that’s controlled by your Raspberry Pi. It includes a standard Pi HAT which attaches to your Raspberry Pi and has a couple of on-board joysticks to control it. Because it’s connected to the Pi you can program it through any of the various programming languages that already run on the Pi. There’s also free software available which lets you program it through a web interface using drag and drop programming environments like Scratch and Blockly or with Python and Javascript for the more experienced.

The MeArm Pi has been designed from the ground up to be easy to assemble so that children can get build it themselves (adults too of course). We’ve reduced the number of screws in this version of the arm and we even include an allen key so you can start building without having to hunt for the right tools. By using Allen key screws it’s easier for kids to build than using a screwdriver which is more prone to slipping.

For more information on the new MeArm Pi Raspberry Pi robotic arm jump over to the Kickstarter website for details by following the link below.