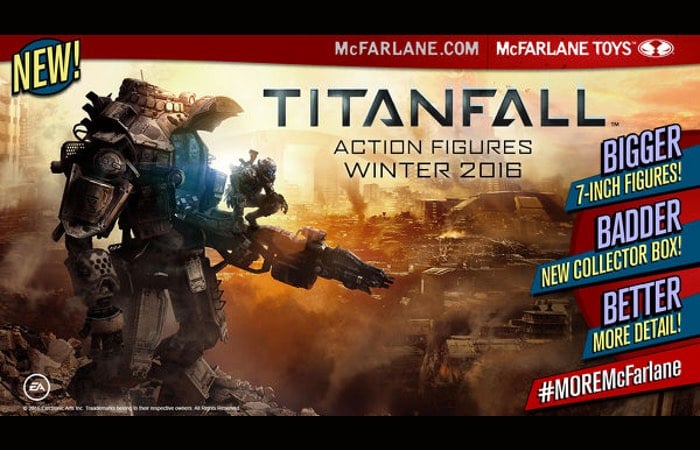 Following on from the rumour earlier this week that the new Titanfall 2 would be expected to be released sometime in 2017. McFarlane Toys has this week revealed that the Titanfall action figures that will be available during the winter of this year 2016.

The Titanfall figures will be a part of 2016 Collector Box Program. Each figure will be seven inches tall with an average of 15 points of articulation, says the promotional literature. Indicating that the Titanfall 2 game ‘might’ now be launching during the winter of 2016 in preparation for the holiday season, although this has not been confirmed by EA.

This is a perfect fit. McFarlane [Toys] was created so I could make cool stuff just like this. Without saying too much about the new game… You’re not going to believe where we can take this.

When EA were questioned about the release date for the new Titanfall 2 game a representative explained :

MacFarlane Toys will be releasing toys inspired by Titanfall in Winter of 2016. We have yet to provide a release date for the next Titanfall experience from Respawn.

As more details are made available regards the as yet unannounced Titanfall 2 game we will keep you updated as always.