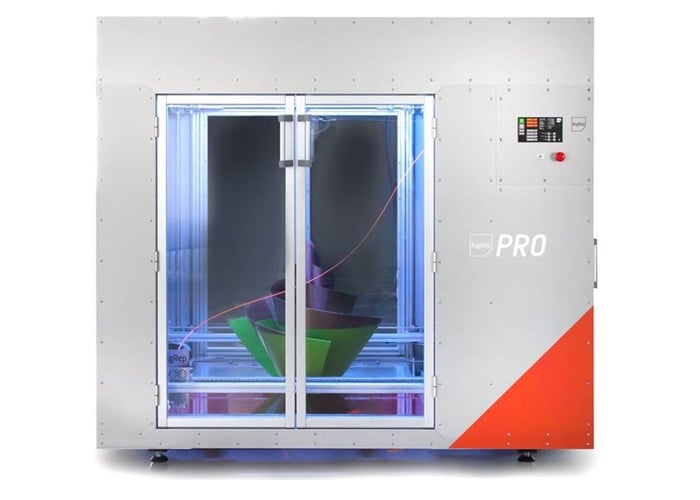 3D Printers, makers and businesses that are looking for a machine that is capable of printing projects roughly 30 times that of a MakerBot Replicator, might be interested in a new 3D printer in the form of the BigRep Pro.

The BigRep Pro offers users a massive build volume of up to 1.5 m³ or 53 cubic ft and is priced at $79,000 and uses FDM based 3D printing technology, building on the technology of the companies earlier 3D printer, the BigRep One.

BigRep explain a little more about the development and design of the new even larger 3D printer :

“The very positive customer feedback over the last few months made us think about introducing a second model, the BigRep PRO. We strongly believed only ‘early adopters’ like designers, artists or architects would become our first BigRep ONE owners. To our surprise many well known large corporations approached us as well.

They have a lot of good experiences with full-scale printing, but most say it´s still way too expensive with the current FDM/FFF 3D Printers on the market. Since we know industry users have different expectations than users like designers we decided to put all of our power into development of a second model, especially focusing on industrial users and industrial environments in prototyping and small batch manufacturing.”

For more information on the new BigRep Pro 3D Printer jump over to the BigRep website for details. Unfortunately full specifications for the new BigRep Pro have not been released as yet but the company says they will be released to the public shortly. As soon as they are we will keep you updated as always.