It was going to be incredibly hard to improve upon the towering achievement that was Mass Effect 2. Combat mechanics that sang, sharp level design, interesting side-quests that amounted to a lot more than the RPG default fetch or kill, astounding texture work, we were fairly certain not even Bioware could top themselves when we first picked up the controller to put the Mass Effect 3 demo through its paces at this year’s Eurogamer Expo. 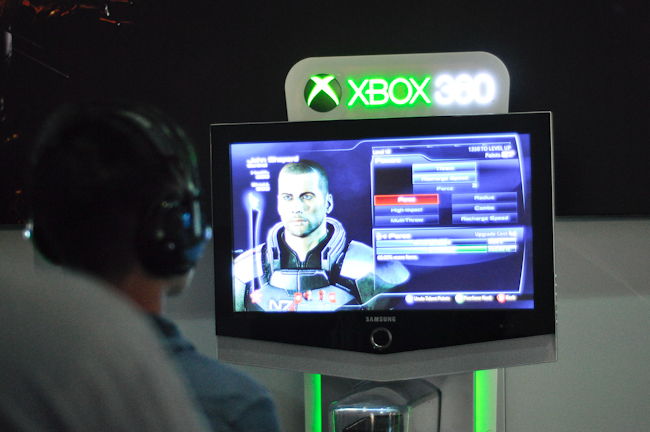 Now, we can’t say whether they’ve succeeded, because that’s not the sort of thing fifteen minutes with a demo tells you. What we can tell you is that what we played featured none of the ballyhooed Earth locations seen in earlier trailers. In fact, the environment was so generic it might have been the Citadel Post Office. There wasn’t the slightest generic, however, about the ensuing fight with Cerberus shock troops to protect the last fertile female Krogan, which if you’ve had contact with the Mass Effect universe at all, you will recognize as kind of a big deal.

Level design is as sharp as ever and enemies have the decency to rappel, jetpack or smash their way in like considerate murderous xenophobes instead of teleporting in like in other recent Bioware efforts. Riot shield wielding enemies who need to be flanked, grenaded or energy bladed into submission spice up the familiar cover based shooter routine, and the whole thing is lightly seasoned with giant battle mech.

We couldn’t help but feel the difficulty was slightly manicured for easier consumption, but between expertly delivered pacing, refreshing dialogue even for Bioware and already near perfect gameplay with extra special melee trimmings, we doubt Bioware can do much of anything to mess up a game that promises to thoroughly reacquaint your couch and your glutes.