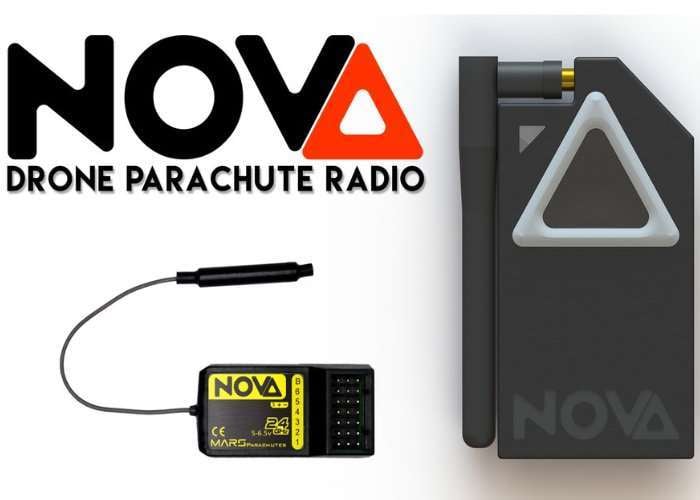 Drone pilots, searching for a safe way to recover their flying machines, may be interested in a new drone parachute radio which is being created by Glen Rineer and is called the Mars NOVA.

Mars NOVA has been designed to work in conjunction with Mars Parachutes products and all servo-based systems and offers a single channel Long Range Radio for UAV or drone safety. Watch the demonstration video below to learn more.

Everyone has seen a YouTube video of someone’s drone falling out of the sky for no reason, not only is this a safety concern but it also results in a costly amount of damage to the drone, and sometimes other objects on the ground below. MARS Parachutes believes that having an emergency system can help reduce the total amount damage and danger significantly.

Drone technology continues to advance on a daily basis, which requires drone safety to do the same. Some drones are able to descend, ascend, maneuver, and even flip at all new levels that will sometimes make automated safety systems difficult to use. Our goal with developing the NOVA is to provide you with more options so you can find the best method that supports your needs.

We have worked very hard on the NOVA. After many revisions we settled on the design which would be the most cost efficient and effective. We wanted the NOVA to be easy to use, small, and built to last a long time. NOVA will work on any drone that has a servo actuated safety system. After making the NOVA we quickly realized it could also be used for all sorts of applications that would utilize a single channel radio, but we’ll leave the possibilities to your imagination.

Jump over to the official Kickstarter campaign page via the link below to make a pledge for the early bird NOVA priced at $65 with shipping expected to take place during January 2018.