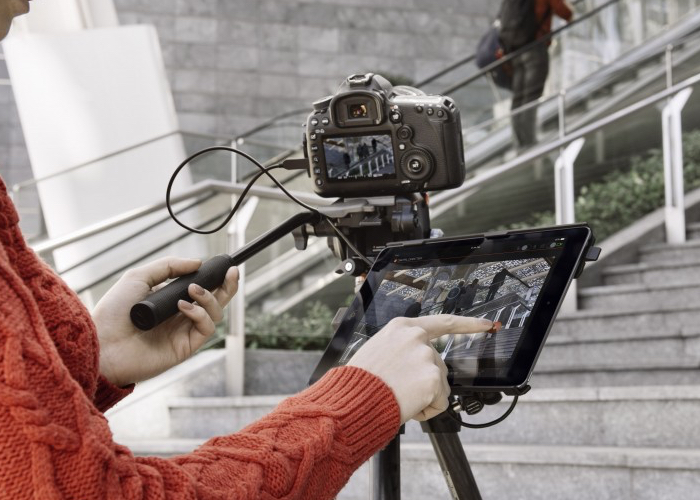 Photographers looking for an easier way to control and view the footage from their DSLR cameras, might be interested in a new iPad application that has been unveiled this week in the form of the new Manfrotto Digital Director iPad system.

Manfrotto have designed their Digital Director iPad app and hardware to compete with other systems already on the market and was unveiled during the 2015 NAB Show.

The Manfrotto Digital Directorsystem consists of a companion application and hardware iPad dock which allows you to easily connect your DSLR camera using a USB cable or the tablets Lightning port on the Apple Air tablet.

The tablet dock created by Manfrotto is equipped with its own ARM Cortex A8 600MHz microprocessor and is capable of providing a picture of the cameras viewfinder real-time image as well as letting users control exposure, focal point, aperture, shutter speed, and more. Although you will need to spend around $499 to be able to equip your camera with the system.

“The heart of the Digital Director is the iPad holder which is customized to securely fit the iPad Air and features a lock to prevent accidental release. The iPad slips into the holder and the Lightning connector provides communication between the iPad and the built-in ARM Cortex A8 600MHz micro processor, and a USB cable connects the unit to the camera. The processor allows for real-time live view monitoring when shooting stills or videos, as well as fast download speeds when transferring full size JPEGs from the camera’s memory card to the iPad.”

For more information on the new Manfrotto Digital Director and the ability to order jump over to the BH Photo & Video website for details via the link below.