It’s the only practical use for the oddly shaped duo. Christened “rec & play” by the Yuri Suzuki-Oscar Diaz design duo who built them, the pens are just screaming for us to write down secret messages. 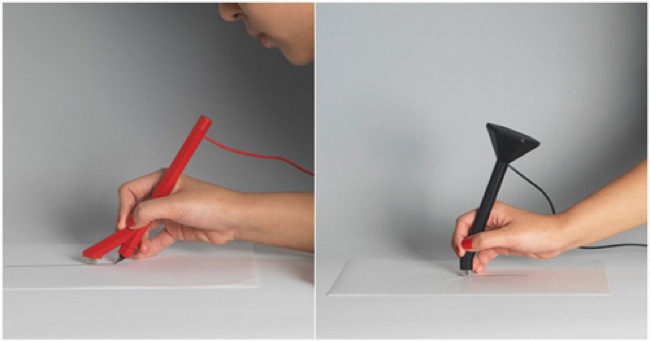 Using cassette technology of yore, both pens function according to their color. The red one you use to scribble a message, which is encoded with sound data. Then you use its black sibling to trace the message which is then transmitted via a built-in speaker. Neat, huh?

Unfortunately these aren’t for sale. The pens are part of an exhibition of Yuri Suzuki’s work dubbed “Sound Interjection” to be held on September 3.

While the concept behind them is impressive, we doubt if these would actually make good spy tools. For starters both pens are too unconventional in appearance. Worse, they’ve got wires.

But just for the hell of it, if we did own a pair it’d be heaps of fun writing odd messages in places and then broadcasting them via the speaker pen. Until the joke gets tired of course and we cry “Next!”