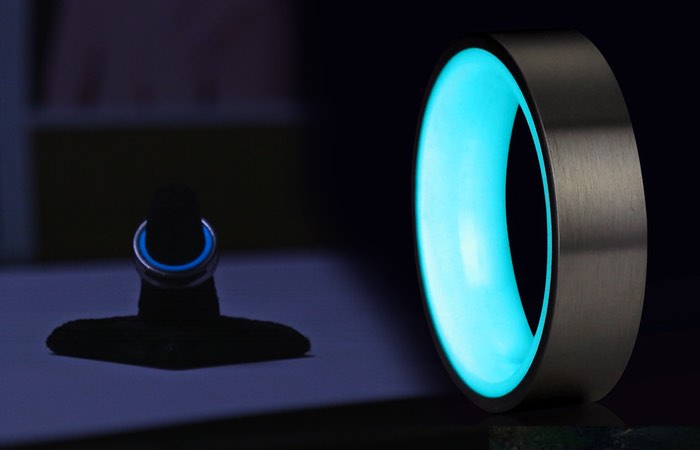 A unique piece of jewellery called the Lumus ring has been created and launched over on the Kickstarter crowdfunding website this month. That is capable of glowing in the dark thanks to laser luminance technology.

The Lumus ring is constructed using titanium and carbon fibre rings which have all been combined with the laser luminance to create a very unique wearable piece of jewellery that is available in five different glowing colours.

Watch the promotional video below to learn more about the technology that gives these unique rings their glow and is now a project over on Kickstarter looking to raise $12,000 over the next 30 days to go into production.

The laser luminance ring is available for early bird backers to pledge for from just $55 and ships to anywhere in the world. Its creators explain more about its construction and unique feature.

The Lumus Rings can only be purchased on Kickstarter from February 4th to March 7th! After the campaign, it is possible that the Lumus Rings will no longer be sold anywhere. This is due to the fact that we are constantly working on developing new products!

The Lumus Ring was born from determination to do better. To improve upon a once new and fascinating technology that has been forgotten and neglected for over a decade. The NASA-created “MoonGlow” technology has been used in many applications over the last decade, including jewelry, and has been hailed as one of the greatest “glow-in-the-dark” solutions available. Then, there was Lumus Ring.

With NASA only being a short drive away from our workspace, I have had the privilege to befriend many members of their staff. After a few more months of planning and meetings, I was finally able to collaborate with a Chemical Engineer from NASA and I was also able to consult with two Engineer’s from SpaceX that also shared my passion for this new technology. Together, utilizing Laser Luminance Technology and some of the most advanced machinery in the world, we can proudly present to you our creation. A brand new, unnamed, technology that debuts in our Lumus Rings.

For more information on the new Lumus ring jump over to the Kickstarter website for details via the link below.