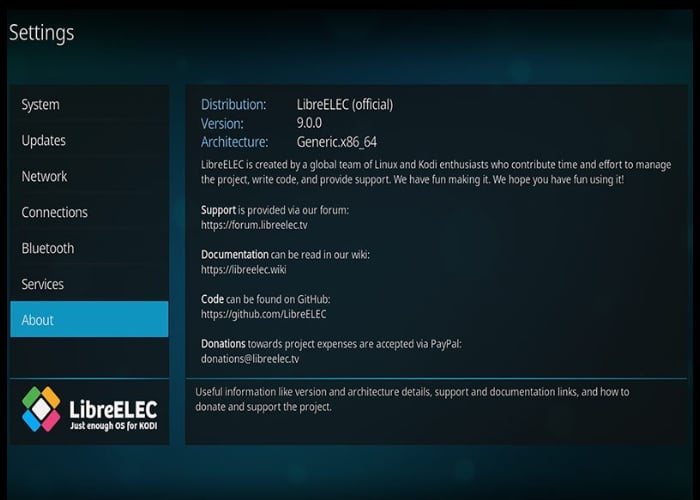 A new version of the Linux distro built around Kodi media center has been released this week in the form of LibreELEC (Leia) 9.0.0 which is now available to download and install. The GNU/Linux-based operating system has been specifically designed to put Kodi front and center and is perfect for those projects where you would only like to run Kodi.

The release follows on from the roll-out of Kodi 18 “Leia” last week which brought with it some major improvements to Blu-ray support, Kodi Retroplayer and DRM support that (equipped with an appropriate add-on) allows Kodi to unofficially stream content from services like Netflix and Amazon.

“Kodi v18 brings initial support for retro gaming and the ability to play hundreds of retro games directly from within Kodi. We provide a large number of emulator cores from our add-on repo, but no games (bring your own) although there are a couple of open source test game add-ons (2048 etc.) in our repo. In this first iteration of Kodi retro gaming support the user interface can be a little confusing and we still need to write-up some HOWTO guides for the wiki. Kodi developers are working on a game database (for Kodi v19) which will make the process of managing and using game ROMs easier in the future.”

New features in the lightweight operating system capable of running on low power hardware including the awesome Raspberry Pi mini PC and others. Include

– Changeable SSH passwords!
– Default firewall (iptables) with simple configurations for Home/Public networks
– Updates are moved to their own menu, other options are cleaned up a little
– Safe Mode boot when Kodi experiences startup problems
–
For more details on all the new features integrated into the LibreELEC (Leia) 9.0.0 release jump over to the official website by following the link below.