In the past few days, we’ve seen several leaked images of the LG Nexus 5 with a red paint job, along with its retail packing found inside some warehouse, as well as a number of leaked images.

For those of you who still have doubts about the existence of the red Nexus 5, the avid Twitter leaker @evleaks has shared an unofficial press render of the device, something he’s very good at. 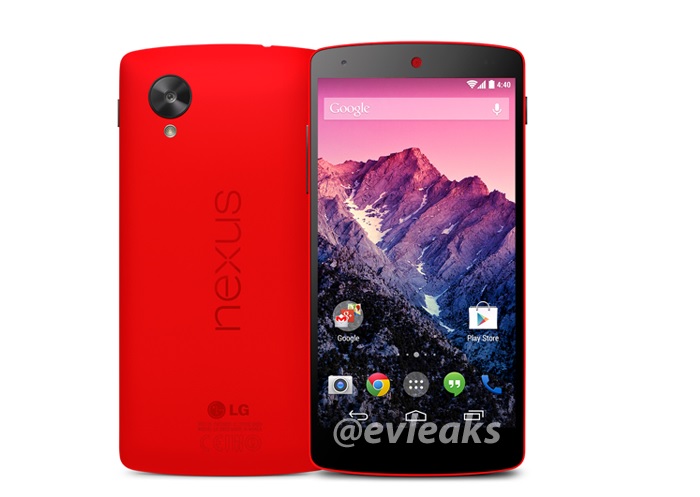 The new color might appeal to those who like bright colors. There’s no change in the hardware specifications of the device, and it stil lrocks a 4.95-inch display boasting a resolution of 1920 x 1080 pixels, a Snapdragon 800 chipset clocked at 2.3Ghz with Adreno 330 GPU and 2GB of RAM on board.

LG Nexus 5 comes with a 8MP rear camera with optical image stabilization with a 2MP front-facing camera. Other features include 16/32GB internal storage although there’s no support for microSD card slot so you have to deal with the space  that’s provided, WiFi, Bluetooth, a 2,300 mAh battery and runs Android 4.4 KitKat pre-installed out of the box.

There’s no official confirmation about the launch of the LG Nexus 5 in red, but rumors suggest it will see the light of the day on February 4th.

We’ll update you as soon as it hits retail.