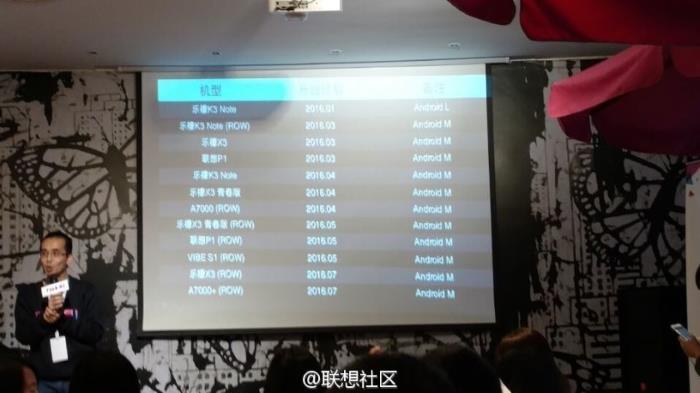 Some images have showed up on Weibo in China. MOst of them aren’t too interesting expect one slide which reveals Android 6.0 Marshmallow update roadmap for the Lenovo handsets.

It seems Lenovo plans to upgrade several of its popular phones to Android 6.0 Marshmallow, including the K3 Note, VIbe X3, Vibe P1, A7000+ series and more. Some of the devices are expected to get the update in the first quarter of 2016, while many devices will have to wait until July before they can enjoy the Android 6.0 Marshmallow goodness.

Lenovo is quite popular in developing countries and I’m sure users will be waiting to see Android Marshmallow update on their devices. Check out the list above to see if the device in your possession is listed in the list.

We’ll update you as soon as the company starts rolling out the Android 6.0 Marshmallow for its devices.