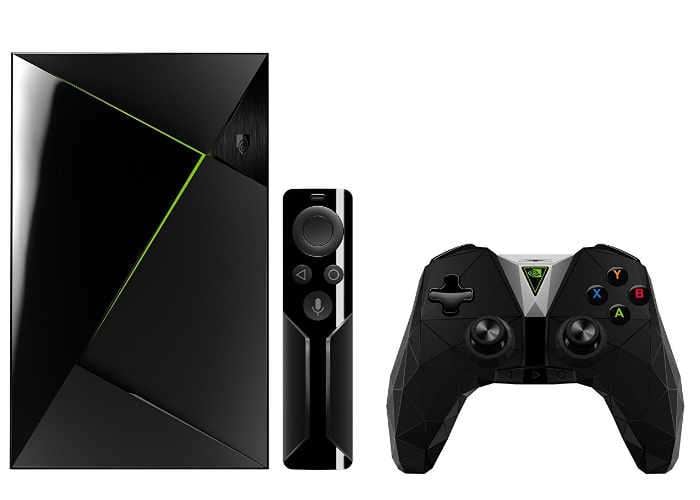 At CES 2017 this week NVIDIA has confirmed the specifications for their new NVIDIA Shield TV media streamers that will take the form of the NVIDIA Shield and Shield Pro which will be available on January 16th and January 30th and priced at $200 and $300 respectively.

the new systems are capable of providing 4K Ultra HD media streaming and come equipped with Google Assistant allowing you to carry out voice searches, install applications and view content from providers such as Netflix, YouTube, HULU, HBO, and more.

Features of the new NVIDIA 4K Streamer include :

• A Killer View – Movies, TV shows and games in amazing 4K HDR, explore thousands of apps like Netflix, YouTube, HBO, Showtime, Pandora, Spotify, Sling TV, PlayStation Vue, Kodi, and more.
• Amazing Games, Played Your Way – Stream AAA PC games with GeForce NOW. Cast your PC games in 4K HDR from your GeForce rig to the living room with GameStream. Exclusive Android games only on SHIELD.
• The World at Your Command – Just say what you want and let Google’s voice search find it in seconds. Get search results from over 100 apps, including Netflix, YouTube, HULU, HBO, and more.
• Best for Prime – Watch Video in 4K HDR and get access to original shows like The Grand Tour, The Man in the High Castle, and much more.
• The Complete Package – SHIELD TV includes the remote and redesigned SHIELD controller with voice search, rumble feedback, and private listening, in a stylish new form factor.

NVIDIA explains more about a few of the new features in the latest 4K streamer.

Built-in Google Voice Search makes it easy to get what you want. All you have to do is ask to find the right app, game, or video quickly and with incredible precision. No more typing. Just instant results from Netflix, YouTube, HULU, HBO, VUDU, and more. Say “show me great sports movies” or “award-winning films” and SHIELD delivers. It’s voice search—only smarter.

NVIDIA SHIELD is a streaming beast. The fastest, smoothest 4K HDR video. Infinite apps and entertainment. NVIDIA-powered gaming in the cloud or from your PC. The power to control every experience with your voice—soon even your home. It’s everything you want in one game-changing device that’s 3X faster than the closest competitor.

For more information on the new NVIDIA Shield TV jump over to the website for details by following the link below.