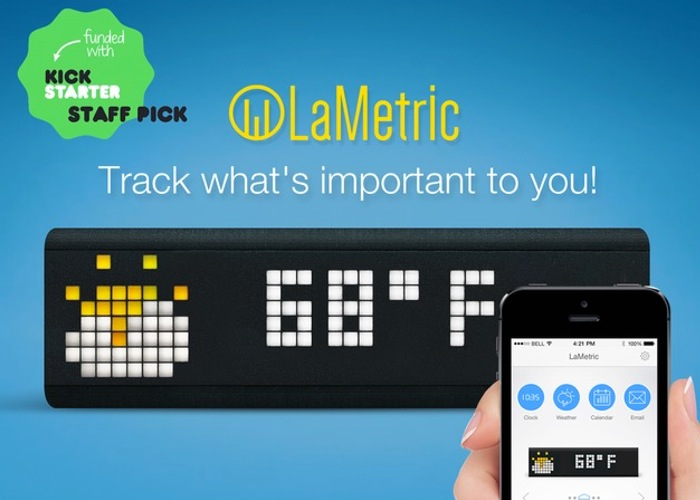 If you are interested in tracking the important things in your life, you might be interested in a new smart ticker called LaMetric, that is in the final hours of its successful Kickstarter campaign.

At the current time LaMetric has already passed $360,000 in funding from over 2,200 backers, after requiring just $69,000 to make the jump to production. Watch the video after the jump to see it in action and learn more.

The hackable real-time smart ticker display is capable of showing alerts and any other information you would like to keep an eye on with ease, including important emails, business metrics and news to name a few. Its creators Smart Atoms explain:

“LaMetric is the first standalone, customizable, hackable ticker that tracks key metrics and displays them in real-time. This unique clock can be set up to tell you the events on your calendar for the day, the temperature or even to count down the days until your new baby is born.

LaMetric eliminates the need to check multiple apps or news sites for the information you need. Instead, you receive everything at a glance, all in one place, in real-time. The possibilities are endless.”

The LaMetric project is currently over on the Kickstarter crowd funding website in the last hours of its campaign to make the jump from concept to production. So if you think LaMetric is something you could benefit from, visit the Kickstarter website now to make a pledge and be one of the first to own it with shipping expected to start early next year.