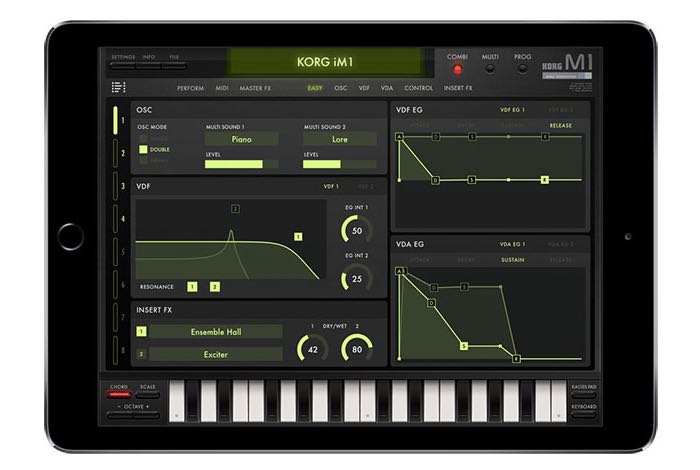 Korg has this week added a new addition to its range of smartphone and tablet applications, with the introduction of the Korg M1 digital synthesizer and music workstation for iPad.

The Korg M1 digital synthesizer app is currently priced at $19.99 until June 30th 2015 as a special introductory offer, and has been designed to provide a “complete reproduction and more”, of the legendary M1 with faithful reproduction of the original M1 Sound.

Watch the video below to see the iPad Korg M1 app in action, Kong explains more about whats included in the iPad app.

“In addition to all 19 of the PCM ROM cards originally released for the M1, iM1 also covers the sounds of the M1EX which expanded the internal PCM of the M1, as well as the sounds of the KORG T-series synthesizers which appeared as an evolution of the M1. There’s also “BEST OF M1,” a selection of 100 great M1 programs.

The new “Smart Sound Browser” takes advantage of the large screen size of the iPad, making it quick and convenient to find the desired type of instrument or tonal character from this gigantic library. You can also view the sounds ranked by how often they are selected by iM1 users around the world. This is a great way to experience a huge variety of sounds that you otherwise might have missed.”

For more information on the new Korg M1 iPad App jump over to the Korg website for details via the link below.