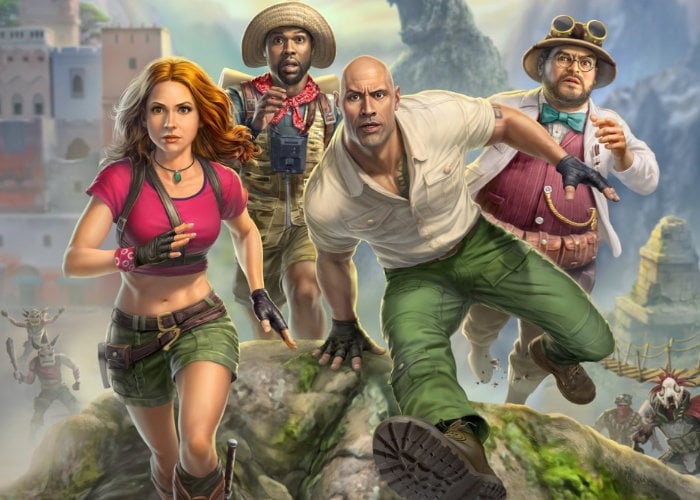 Joining the imminent premiere of the fourth Jumanji film developer Funsolve Ltd and publisher Outright Games of made available the new Jumanji video game. Jumanji The Video Game is loosely based on Jumanji The Next Level 2019 movie and Jumanji Welcome To The Jungle Which premiered back in 2017 film from Sony Pictures.

“The game uses characters from the movie’s and their likeness including Dwayne Johnson, Jack Black, Kevin Hart and Karen Gillian. Unite in adventure and laughter in the action packed game of Jumanji, as you try to survive the ultimate challenge for those seeking to leave their world behind! Only you and three teammates can recover the jewels and save Jumanji. So get online, gather friends for split-screen play, or go alone with AI companions.

There’s an army of evil marauders to take on, deadly beasts and traps to dodge, and cool customizations to unlock. And with heroes Dr. Smolder Bravestone, Ruby Roundhouse, Franklin Mouse Finbar, and Professor Sheldon Shelly Oberon as your avatars, you know you’ve got the unique abilities and hilarious failings to save the day! The world of Jumanji gets bigger with beautiful but snowy mountains, city and jungle environments”

• RETURN TO THE JUNGLE – Play as movie heroes Dr. Bravestone, Ruby, Mouse, and Prof. Shelly in a hilarious new 3D action adventure
• TEAM UP – In online or split-screen modes, work together with up to three friends or AI teammates to defeat enemies, survive deadly traps, and save the world
• DANGEROUS LOCATIONS – The world of Jumanji gets bigger with beautiful but deadly new mountain, city and jungle environments
• ENDLESS ADVENTURE – As you hone your skills and strategies, and unlock new outfits and weapon styles, no two rounds of Jumanji are ever the same!