Remember this? What was once a mere prototype is ready to hit the road in Japan. It’s pretty obvious these days that all the big automakers are developing compact city cars whose uniform appearance hardly leaves any space for creative flourishes. As city cars go, at least in concept, they’re either hybrids or electric-powered. It’s the inescapable wave of the future and this experimental three-wheeled ride is no exception. 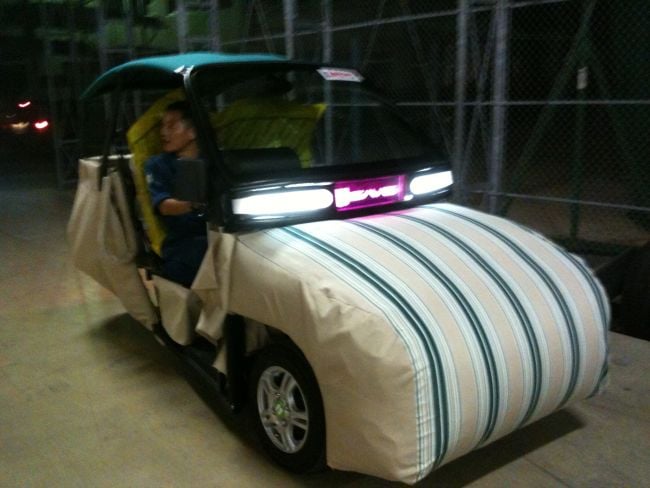 The iSAVE-SC1 does have a unique streak though. For starters, its body isn’t made of cardboard thin sheet metal but a cushy airbag. This means getting run over by the iSAVE is kind of fun and harmless rather than life-threatening.

Even the car’s interior puts a fresh spin on modern standards. It’s made of tent fabric, meaning there isn’t a surface eon this ride that’s even remotely hard. So what happens when you’re driving around in what amounts to a three-wheeled pillow?

If you hit another car, it’s no biggie, that’s what. The incredible news is the iSAVE is no longer a mere prototype and starts selling next month for around $10,000 plus. Below is a vid we picked up from somewhere: