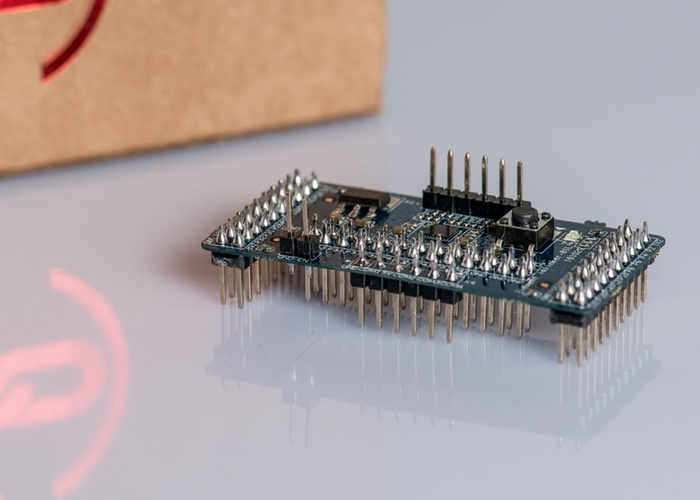 Makers, developers and hobbyists building Arduino, Raspberry Pi or PC projects may be interested in a new piece of hardware which has been created to provide the ultimate IO interface for the aforementioned platforms.

The iolinker interface board has been created by Julian von Mendel based in Donauwörth, Germany and allows you to self-test and rewire your circuitry or use your own FPGA code. Check out the video below to learn more.

IO Extension – The FPGA board presented here features 49 GPIOs, all usable for IO extension with an easy to use library, on Arduino, Raspberry and on your PC.

IO Linking – This is what gives this product its name. When you link two GPIOs, say P5 to P1, pin P1 turns into an input, and all incoming signals are forwarded to the output pin P5. (Essentially creating a matrix of IO connections.) iolinker boards are flexible IO interfaces, controlled via UART, SPI or I2C, that offer

• IO extension,
• IO linking,
• and PWM generation.
• Up to 127 iolinker boards can be chained, to allow for enormous IO extension where needed. (They each have their own address, encoded with 0K resistors.)

If you are an embedded developer, you will be excited with these new opportunities!

• Ultra flexible IO interfaces.
• Transferring the circuitry of your digital signals to the iolinker chip; keeping circuits within your software.
• Perfect version control.
• Self-testing: iolinker chips can be used to verify the digital levels on all of their pins, and detect plus locate short-circuits. This is a dream come true for product design.
• Simplified bus design: You want to hook up several chips, and simplify your life? Let iolinker hook up any of two UART devices on the fly; and switch to the next one afterwards. For example connect 24 Arduino UARTs to the iolinker adapter ontop of your first Arduino — that can now decide who talks to whom.
• Complex, self-testing plug’n’play bus: Verify signal levels and check for short-circuits, before you hook up new devices with your shared bus.
• Less tedious jumper cable wiring.

For more information on the new iolinker jump over to the Kickstarter website for details by following the link below. If you enjoy building Pi projects you might be interested in our comprehensive list of Raspberry Pi displays, HATS and small screens.