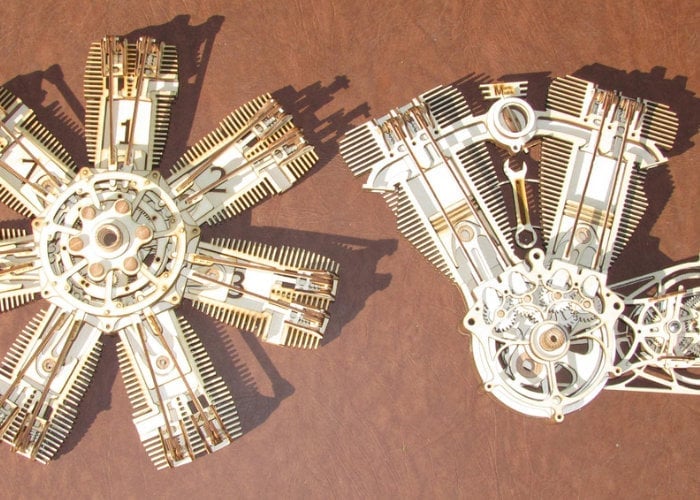 Don Morris an Aviation Technologies Professor at Southern Illinois University has created a range of intricate laser cut engine kits with fully functional gears, pistons, valves, and cams design to be wall hung. The advance kits feature hundreds of small and large parts, all of which have to be glued together and fitted. Each kit requires owners to trim, sand, and glue to tight tolerances to make the engine function correctly. Watch the demonstration video below to learn more about their construction and design. 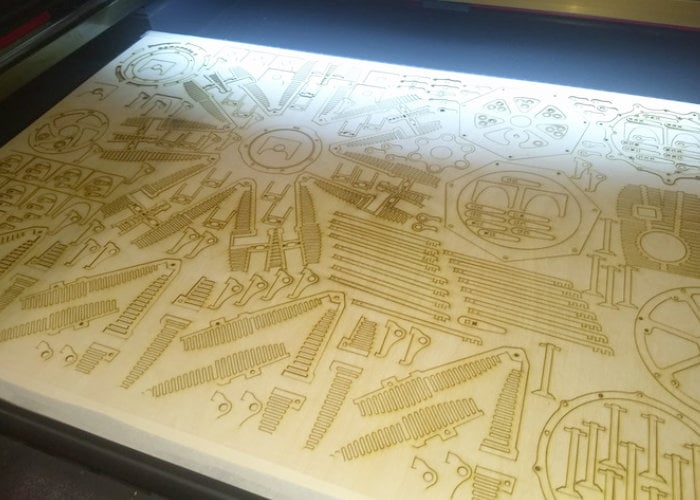 “The first model I would like to introduce is a 7 cylinder radial engine. It is inspired by the famous engines that powered Lindbergh across the Atlantic and America to victory in WWII. The art-deco styled cutaway (standard sized) is nearly 16 inches in diameter – large enough to look good hanging on most walls. It is full of authentic working features – including a classic master and slave rod system. The pistons and valves move accurately enough to be used as teaching aids in a University classroom. When you spin the prop flange, you can clearly see how a three lobed cam plate can operate the valves to seven cylinders without missing a stroke. “

“The second engine model I would like to introduce is a V-Twin. It is inspired by the legendary Harley Davidson (R) Sportster engines from the late 50’s. Legend has it that this engine is actually a radial engine with all but two of the cylinders stripped off. This certainly makes sense, as the radial was still the powerplant of choice for bombers and airliners when this engine was introduced. My representation prominently features four individually geared camshafts, a genuine blade and fork piston rod arrangement (like the Merlin engine in a P-51 Mustang), parallel valves, a cog-belt primary drive, and an operational three speed transmission that actually shifts. “

The engine kits are now available via Kickstarter with early bird pledges available from $75 or roughly £58 with worldwide shipping expected to take place during July 2019.