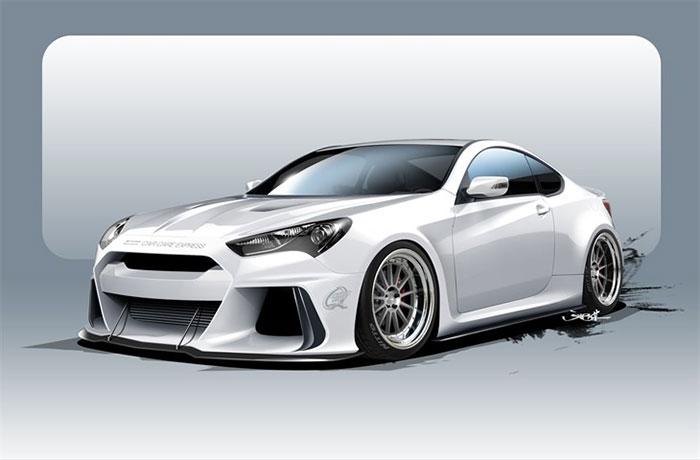 Hyundai is normally one of the most prolific car markers to show up at SEMA each year. The company at times rolls out a handful of custom show cars. Hyundai is teasing a new show car that will be at SEMA 2015 and is a tie up with ARK Performance dubbed the Solus Genesis Coupe. The car has an aggressive looking design on the outside that is race inspired.

The body upgrades include an ARK Performance Solus body kit that makes the car look much wider. The car also has a small trunk spoiler and a carbon fiber front splitter. Inside the car is an updated interior with a redesigned dash with racing inspired gauges and steering wheel. Lots of carbon fiber is applied to the interior as well.

The big updates come under the hood where the 3.8L V6 was punched out to 4.0L and fitted with upgraded internals and a Rotrex supercharger. The modifications push the power to 500hp going to the ground via the rear wheels and a 6-speed manual. Tires are updated to Nitto NT05 performance rubber. The car will get official on November 3 at 11:30 a.m. PT during the Hyundai press conference at SEMA.