We have already heard some specifications on the new Huawei Ascend P7, the handset will be made official next month, and now we have some details on the Huawei Ascend P7 Mini.

The Huawei Ascend P7 Mini has turned up on Huawei’s website, along with a full list of specifications for this new Android smartphone. 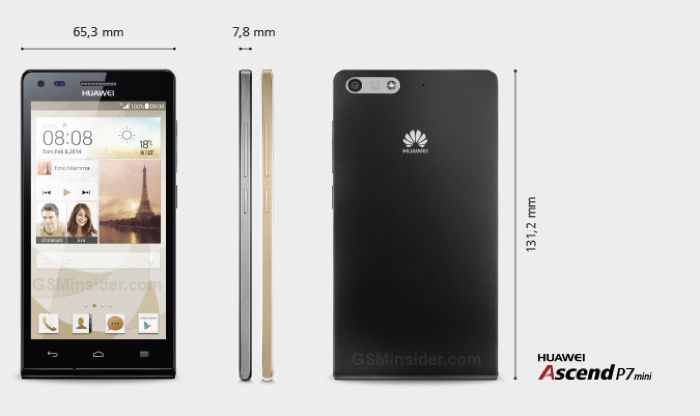 The Ascend P7 Mini is equipped with a 4.5 inch qHD display that has a resolution of 960 x 540 pixels, the handset is powered by a quad core Qualcomm Snapdragon processor with a clock speed of 1.2GHz, there is also 1GB of RAM and an Adreno 330 GPU.

Other specifications on the Ascend P7 Mini include 8GB of built in storage, plus a microSD card slot that offers support for 32GB cards.

The device also comes with a 5 megapixel front facing camera and an 8 megapixel rear camera with an LED flash and auto focus, plus a 2,000 mAh battery.

The Ascend P7 Mini also come with Android 4.3 Jelly bean and Huawei’s Emotion UI, it comes with GSM, 3G and 4G LTE, plus WiFi and Bluetooth.

As yet there are no details on how much the Huawei Ascend P7 Mini will retail for and also no details on when it will be available, as soon as we get some more information, we will let you guys know.