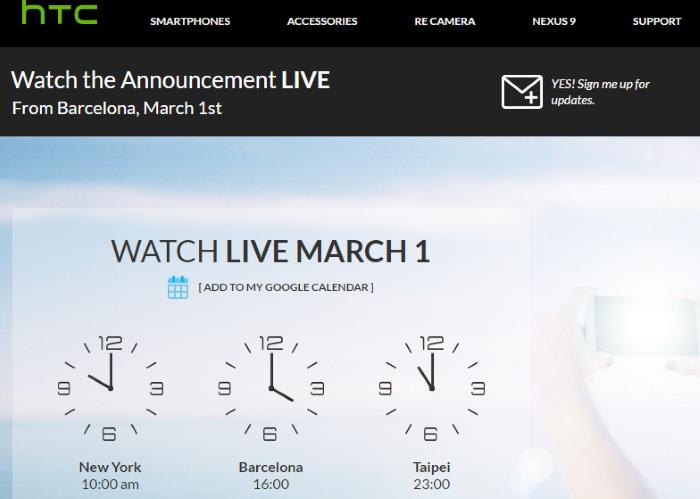 HTC has scheduled an event on March 1st where the company is expected to unveil new products, possibly the upcoming flagship device, HTC One M9.

For those of you who are unable to make it to Barcelona, but want to witness the unveiling of the alleged HTC One M9, the Taiwanese company will livestream the event online for those who are not at the Mobile World Congress 2015.

The event will kick off at 16:00 Barcelona time, so make sure to mark your calendar if you don’t want to miss the big event.

As far as the HTC One M9 is concerned, the upcoming flagship device from the Taiwanese OEM is expected to come with top-of-the-line specifications, including a 5-inch display boasting a resolution of 2,560 by 1,440 pixels resolution, a quad-core Snapdragon 810 processor paired with 3GB of RAM and multiple storage options.

Other rumored features include 20MP camera for photos and videos, a 13MP front-facing camera, and should ship with Android 5.0 Lollipop with Sense 7 UI as its operating system out of the box.

The Mobile World Congress 2015 is just around the corner, it’s going to be an action-packed event as many other big manufacturers are expected to take the wraps off their flagship devices. We’ll update you as soon as the device is officially announced.