Yesterday, HTC America President Jason Mackenzie, tweeted that HTC One Developer Edition will get the taste of Android 4.3 by the end of this week, followed by Canadian HTC One users. Now, it seems that the update is rolling out in Taiwan. Sized at 512MB, Android 4.3 Update for HTC One brings a number of improvements and bug fixes. 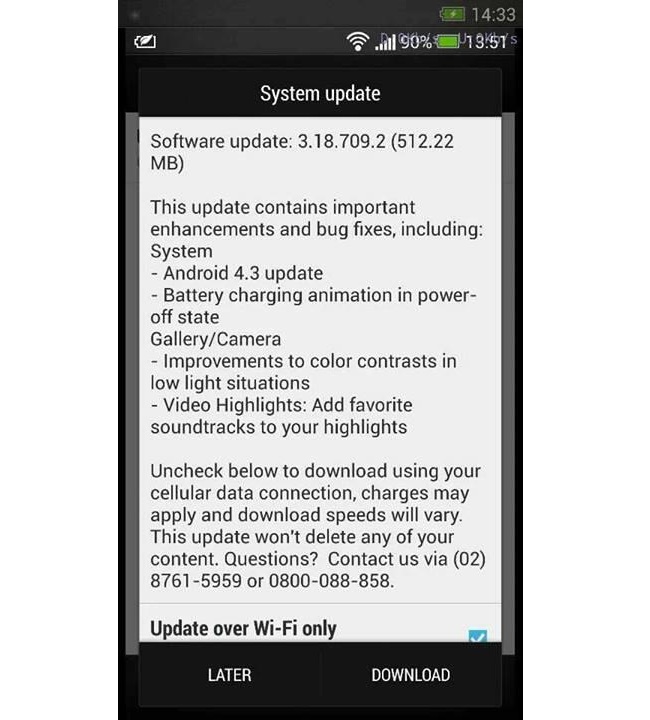 Recently, LlabToofer posted a screenshot of HTC One Android 4.3 update changelog. Many users would be disappointed to know to know that Android 4.3 doesn’t update the Sense UI. However, it does bring some useful tweaks and updates including a new charging animation when the handset is off, fixed some camera issues and improve color contrast in low-light conditions, and users can now add sounds to video highlights. It is not confirmed yet if the update fix the purple tint bug, but we’ll find out very soon about it.

A similar update is expected to hit the Developer edition in US very soon. HTC One users in Canada will also get the taste of Android 4.3 update by the end of this month, as many carriers have posted a schedule of the update. For US carriers, there is no ETA and users might have to wait a little longer. We’ll update you if there is any other news about HTC One Android 4.3 update for US carriers and other regions.