Not too long ago, HTC unveiled their latest creation, the all new HTC One M8, but is it good enough when compared with the competition?

Take a look at the video below which compares the latest HTC One M8 with Apple’s forward-thinking iPhone 5S, giving viewers a hardware as well as specifications comparison. 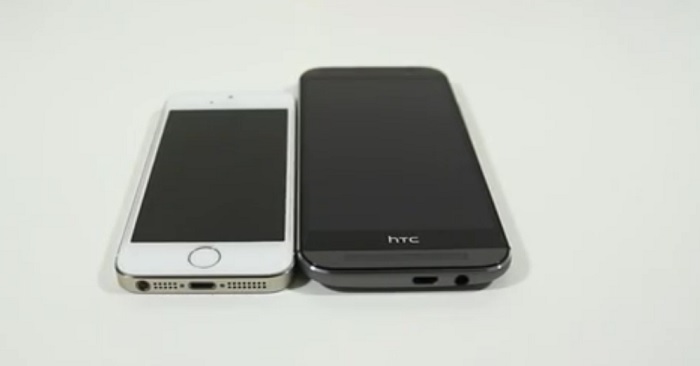 Personally, I feel like it’s a little difficult to let users decide because Android fans will prefer the HTC One, while iOS lovers will not look anywhere else except the iPhone 5S. Let me tell you one thing: both devices are simply amazing, in terms of looks, build quality, design and hardware. Both run a different operating system so there might be a little difference in performance.

Anyway, for those of you who needs a refresher, the all new HTC One M8 rocks a 5-inch 1080p display, a quad-core Snapdragon 801 chipset clocked at 2.3GHz, 2GB of RAM, 16/32GB storage with a microSD card slot, Duo cameras with UltraPixel, 5MP front-facing camera and runs Android 4.4.2 KitKat with Sense 6.0. It also comes as a Google Play edition device running the stock Android, which is a little tweaked to make use of the Duo camera on the back.

As far as iPhone 5S is concerned, it comes with a 4-inch retina display, Apple A8 processor, 1GB of RAM, 16/32/64GB storage options, 8MP camera and runs iOS 7 as its operating system.

Take a look at the video below and decide for yourself.