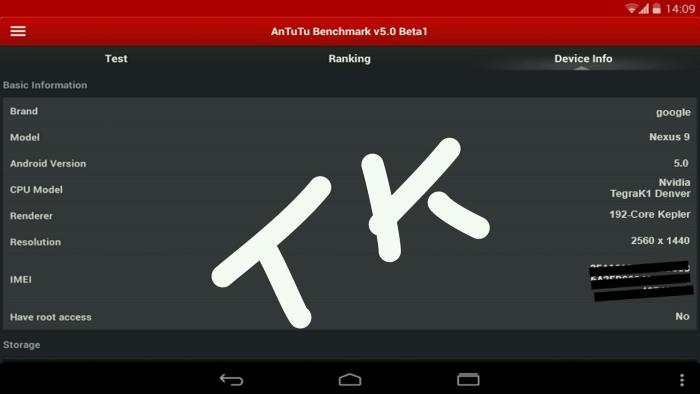 Nexus 9 has seen its fair share of rumors in the past few days. Not too long ago, we spotted some screenshots make their way on to the internet confirming the presence of the Tegra K1 processor on the upcoming Nexus tablet.

After the CPU-Z leak, TKTechNews managed to get their hands on AnTuTu benchmarks leak for the upcoming Nexus 9 tablet. The alleged tablet managed to score a whopping 45,923 on the benchmark, which is quite impressive.

According to the benchmark, the alleged Nexus 9 tablet will feature a 64-bit Nvidia Tegra K1 processor, with a screen resolution of 2560 x 1440 pixels — the display size is expected to be 8.9-inches. 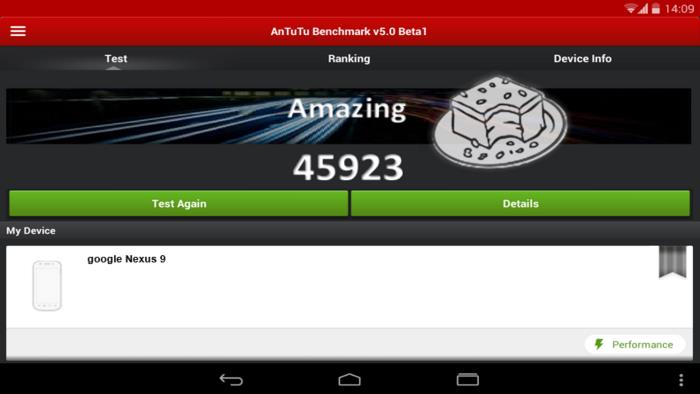 The test results clearly mention the model name as “Nexus 9” which means. On the software front, it’s running Android 5.0 L version, which is expected to see the light of the day in the coming weeks, as early as October if we take into account previous rumors.Other rumored features include 3GB of RAM, 16/32GB internal storage and an 8MP camera with optical image stabilization.

There’s no official word from Google about the existence of any such tablet, but the leaks suggest otherwise. It’s recommended to take this with a grain of salt, we’ll update you as soon as we get more information