If you have been kicking yourself for not picking up a TouchPad when they were on fire sale for $99, here is your chance again. The catch is that the tablet is a bit more expensive now than it was a while back. On TigerDirect, the tablet is $149.99 after a $150 rebate. 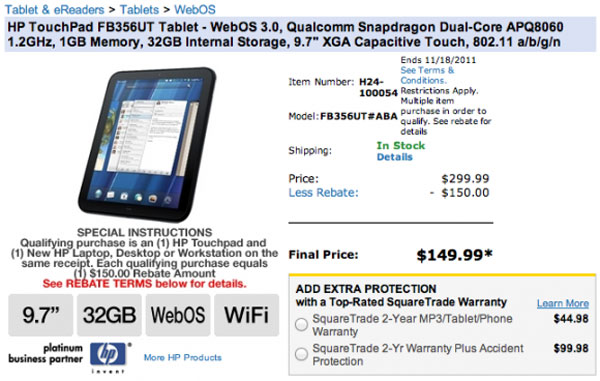 If you are wondering what the catch is, this deal is just like the one we saw at Best Buy a few weeks back. To get the $150 rebate the buyer has to also purchase a qualifying HP laptop, desktop, or workstation. The rebate apparently comes to you in the mail so you pay $299.99 for the tablet up front.

On closer inspection this isn’t such a good deal, you should have bought while the TouchPads were $99.99. this tablet failed miserably on the market, but people still want them to turn into Android tablets. I wonder if HP will see what the market is saying and launch an Android tablet now.