The graphic below is but a small glimpse into a highly detailed, very informative map that chronicles Call of Duty down the ages, beginning with its World War 2 origins right up to the grit of Black Ops. Oh, and guess what—Modern Warfare 3 is on the way! 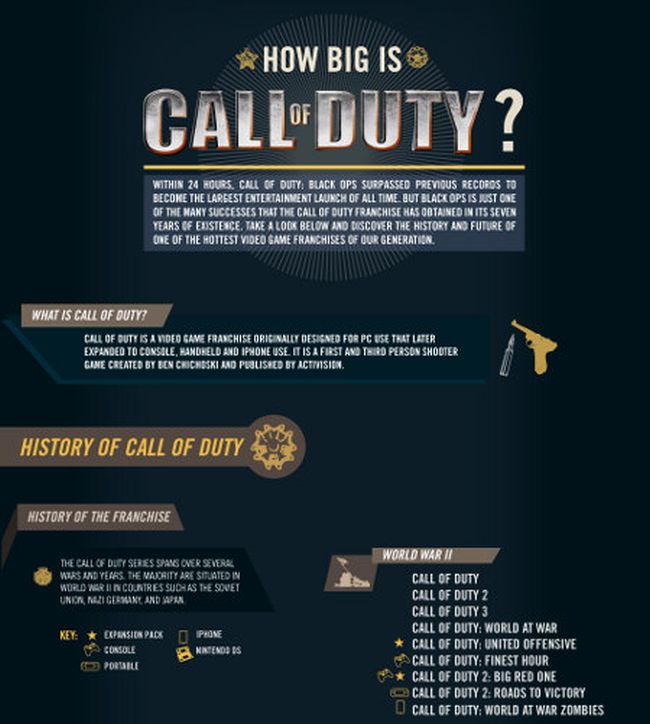 Since Call of Duty has grown into a video game institution and super lucrative series, it’s only fitting that a chronicle is made writ recounting its glorious achievements. The numbers speak for themselves, especially in the aftermath of Black Ops, which is an all time winner even if Treyarch’s take on the series (we miss you Infinity Ward) was a bit uneven. (Anyone wonder why the plot o Black Ops and ad Company 2 is kinda similar, Russian bio-weapons and all?)

Anyway, for an awesome glimpse of the detailed graphic, go here and absorb the info. You’ll hardly remember much of it, but it does reinforce the Call of Duty mythos.

Of course, a  long time from now (like 2012 or 2013—really far off), historians will contemplate the impact CoD had on a susceptible gaming generation. Hopefully they don’t forget the other great titles (a.k.a. CoD’s competition) that brought the glory and horror of wars past and future to new life—Rainbow Six, Battlefield, Medal of Honor, et. al.