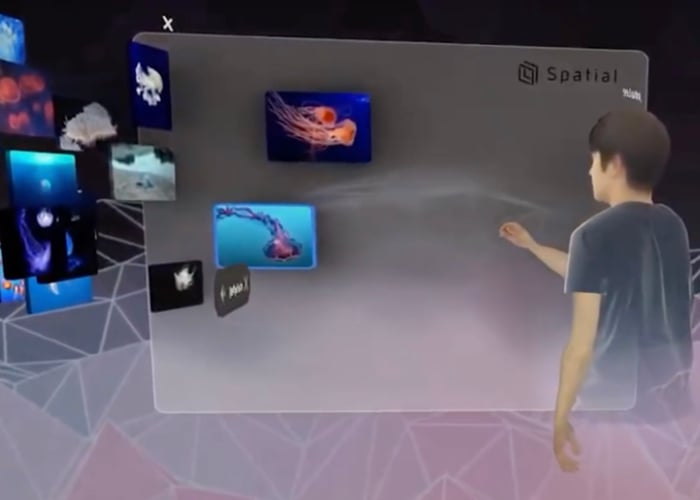 As well as announcing the launch of their new second-generation Microsoft HoloLens Mixed Reality headset in the form of the aptly named HoloLens 2 at MWC 2019 in Barcelona this week. Microsoft has also been demonstrating Spatial a real-time augmented reality collaboration platform first developed for the original HoloLens by New York-based startup Spatial.

check out the four-minute demonstration video below to learn more about what you can expect from HoloLens 2 Spatial remote collaboration and its advancements now using the second generation hardware. “Agarawala and Lee demonstrated some new features coming to Spatial, among which are more lifelike avatars thanks to HoloLens 2’s improved hand-tracking and newly introduced eye-tracking. Chatting through Spatial, Lee’s avatar mirrored his physical arm, hand and eye movements in a way that simply wasn’t possible running on the original HoloLens.”

The Road to VR website explains, “Like all on-stage HoloLens demos to date, footage was captured with an external camera which included mixed reality & depth-sensing hardware to better visually demonstrate how a user can interact with virtual objects in their physical environment. Despite the video’s more immersive visuals, Spatial’s HoloLens 2 demo offers a prescient look at what could be the workplace of tomorrow.”

For more information on these latest HoloLens 2 Mixed Reality headset which is now available to preorder priced at $3,500 jump over to the official Microsoft website by following the link below.