Modern civilization is a messy thing and if it weren’t for cost effective waste management solutions like Poo Gloo Mother Earth would be even more pissed off at us than she already is. But this intriguing Poo Gloo, what does it do? (Hey that rhymed!) 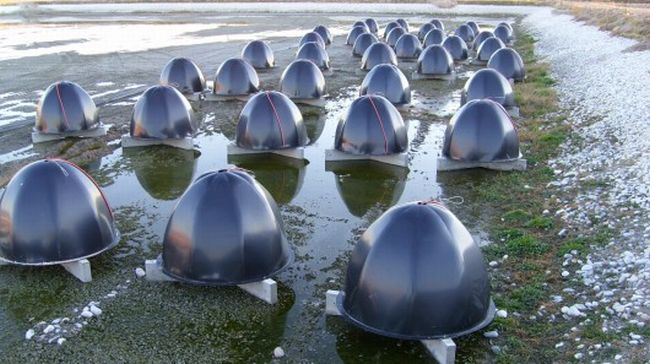 That’s exactly what it does, clean up doo. Confused? Let us explain in a lot of words:

The Poo Gloo is a clever, multi layered plastic structure that incubates and spreads waste-reducing bacteria in bodies of water choked by raw sewage. Rather than have poor little fishies feed on human waste, the Po Gloo does the job along with nature’s micro-janitors. Working in batches deployed in a specific area, the Poo Gloos prove their usefulness silently and without remorse, leaving a cleaner Earth as a result.

The science behind the Poo Gloos waste-consuming tactics is a little complicated; doesn’t mean we can’t give it our best shot though. The Poo Gloo design, which calls for layers of plastic domes and an air hole on its crest, cultivates a bacterial biofilm that it spreads across a watery surface. Keep in mind, however, that the Poo Gloo isn’t all green—it requires a small amount of electricity. (The same amount as a 75 watt bulb.) No biggie.

Poo Gloo’s makers have rechristened their poo-breaking (in lieu of groundbreaking) product Bio Dome in an effort to keep people from cracking brown jokes whenever it’s mentioned. Whatever, it’ll always remain awesome in a really disgusting way. Rock on Poo Gloo. Rock on!